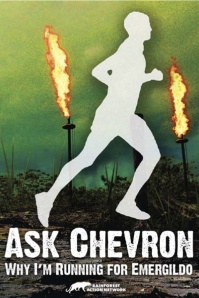 Who knew that leg stretching and laps could challenge the CEO of one of the world’s largest and most powerful corporations?

I arrived in Houston, TX yesterday (yeehaw!) to run for human rights in Ecuador at this weekend’s huge Chevron-sponsored Houston marathon.

We have a rad team of people who are running the marathon for Emergildo Criollo, an Indigenous Ecuadorean man who has had to bury two children and nurse his wife through cancer because Chevron refuses to clean up their toxic legacy in Ecuador. Over 18 billion tons of toxic sludge was DELIBERATELY dumped into the Ecuadorean Amazon (on people’s home, in their water, etc) in one of the largest environmental disasters of all time. Emergildo’s family drank, fished, and bathed in the water that Chevron has refused to clean up.

Check out this great, short video made by our friends at Amazon Watch about the crisis in Ecuador.

While we’re in Houston, besides running, Rainforest Action Network advocates will drop “Change Chevron” banners along the race route, distribute “I’m Running for Human Rights” stickers to runners at the Marathon expo, and host a free screening of Crude – the critically acclaimed documentary about the crisis in Ecuador – for Chevron employees and the Houston community. Stay tuned for more marathon and changing Chevron fun.

Chevron wants the world to believe they are company that cares – and they sponsor community events like marathons and concerts- to hide their real, dangerous impacts on communities around the world. I feel it is important to bring the voice of people and communities that are literally dying because of Chevron’s deadly operations to these events.

That’s why at the Chevron Houston marathon on Sunday I’ll be running for Emergildo and the over 1,400 Ecuadoreans who have died because of Chevron’s negligence.

****This is cross-posted on ItsGettingHotinHere.org***

Someone at JPMC Needs a Reminder