Yesterday thousands of people converged on the Capitol Power Plant to engage in mass civil disobedience, shutting it down for the afternoon to demand clean energy solutions to our economic and climate crises.

There is already a lot being written about how this action achieved our goals in building outside pressure, political will, and urgency to change the national conversation around the climate crisis and get bold policy in 2009. The announcement three days prior to our action that the Capitol Power Plant would be switched off coal validates the power of mass pressure and people power, as we push on to fight for truly clean energy. The amazing media we have already gotten has helped shape the national conversation.

I want to talk about another goal we had: movement building – and how we can make the most of it. 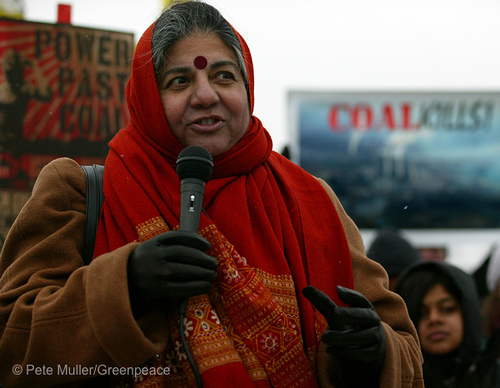 Through organizing this action, nearly 2,000 people were trained in non-violent direct action. Hundreds of people stepped into roles like peacekeepers, contingent leaders, artists, trainers, media runners, tablers, scouts, chant leaders, media wranglers, technical communications, police liaisons, worker liaisons, trash clean up, medics, support (bringing people food, water, blankets, and hot chocolate), online support, photographers and videographers, spokespeople, and many many others. Our resolve and determination not only brought many to risk arrest, but all of us to brave harsh weather. Speakers ranging from Dr. Vandana Shiva, to Bobby Kennedy, to DC Congresswoman Eleanor Holmes Norton, to Dr. James Hansen took the mic to support this movement and action.

We certainly surpassed our expectation of 3,000 people participating, some are estimating thousands more than that.

But here’s the inside scoop: it’s important to be real about this action, what it is, and what it isn’t. This action was a national flashpoint to get together and help move our country forward on a federal level. It was also an “outside strategy” that gave leverage to the thousands who were inside Congress lobbying for clear and specific policy.

But we all know that civil disobedience and non-violent direct action is just one tool of many – sometimes it’s strategic, sometimes its not. We are honored and excited that so many thousands of people have had a transformational experience yesterday and are energized to go home and use these tactics. That was a goal.

But to get excited about tactics for their own sake – devoid of strategic context and community accountability – would be to take the wrong lesson home.

We believe in direct action that is community led, and part of ongoing campaigns where directly affected people are in leadership positions and making decisions. These kinds of direct actions are often smaller and much less “sexy” and “flashy” than national convergences like Capitol Climate Action. The role of national convergences like CCA is specific and rare – and the real work happens when we go back home. While yesterday’s action was endorsed by over 100 organizations, including many from impacted regions throughout the continent, the convening organizations who made up our organizing group (along with allies) – Rainforest Action Network, Greenpeace, Chesapeake Climate Action Network, and the Ruckus Society – are justice-minded organizations that are national or regional in scope, but are not community-based groups. We want to be transparent about that. We believe in supporting such groups and their leadership in our movement. We were honored to be able to support Native, Appalachian, and urban communities affected by the life cycle of coal in leading our march and being spokespeople for the action. But people wanting to engage in tactics like this should seek local community support and build with one another to craft a smart, thoughtful intervention and escalation with people who live in the impacted area. A MAJOR VICTORY WAS WON YESTERDAY. But this victory will be powerful when all of us who have been transformed by this action go home to our communities and engage responsibly and strategically. Yesterday’s action is not a model for a community or local action, it was a vehicle to accelerate the national debate and help push our movement forward.

We have talked a lot about how this was the largest mass action on global warming in history – and it was. We should be proud. It is also important for us to think of this as a first step – movements across the globe have been doing this kind of work for ages, and the youth climate movement is very new at it. Let’s celebrate our own power, but do so with humility, knowing we have a lot to learn – not just from the movements that came before us, but from those who are currently pulsing across our planet alongside us. I’ve started to compile a short list of resources on social movements and organizing here. Also see great training organizations like School of Unity and Liberation, Training for Change, Ruckus, SmartMeme, Highlander Center, and Catalyst Project. Check out some tools for inclusive organizing here. WHAT’S NEXT? – CCA organizers will be compiling a list of next steps, including local campaigns and actions across the country, for folks to plug into as is appropriate. LETS KEEP OUR MOMENTUM GOING!