There is no environmental justice without workers’ rights. Exploitation, in any form, can never be “sustainable.”

And it’s no coincidence that the same dirty industries that aim to squeeze out the most short-term profit disregard environmental safeguards and workers’ fundamental rights at the same time.

When labor rights and the environment are fought for side by side, we not only ensure safer working conditions, we also work to build a future that is just, economically viable, and climate-stable. 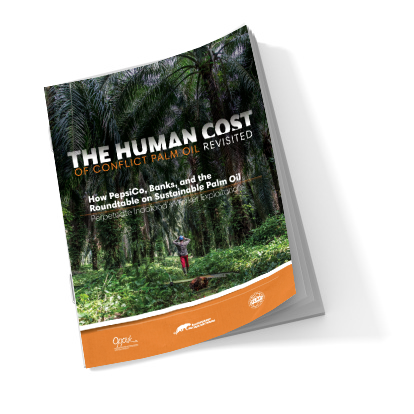 Read it now
View the whole library
Exploited workers and rainforest destruction: it’s a package deal for Conflict Palm Oil. Because after the rainforests fall, rows and rows of palm oil trees take their place, and generations of palm oil workers are left to face ongoing devastation and exploitation.

There are an estimated 3.5 million workers on palm oil plantations and child labor, human trafficking, and modern-day slavery are widespread. Workers are exploited, exposed to toxic pesticides, and paid poverty wages. These massive plantations can stretch for miles, swallowing whole villages inside of them, and control nearly every aspect of a worker’s life — housing, medical care, food, and education. Even if a worker is able to leave a plantation, debt-bondage and no other options for work often keep workers and families trapped, sometimes for generations.

Massive food brands — household names who bill themselves as “sustainable” or “family-friendly” — ignore the problem as they continue to source Conflict Palm Oil from these exploitative suppliers.

And during the COVID-19 pandemic, labor rights violations not only continued but worsened, including reported cases of intimidation and union busting. In just the first few months after the COVID-19 outbreak hit Southeast Asia, over five hundred of just one union’s palm oil members on Indofood’s plantations were laid off. Most of them were daily workers that Indofood had never made permanent so their work was already precarious — folks living paycheck to paycheck every day without job security and basic benefits such as health insurance. Indofood refused to pay them a severance benefit, invalidating their many years of service, and compounding their vulnerability during unprecedented times.

While hundreds of palm oil workers were out of work, the “survivors” of the layoff had to deal with increased workloads that included higher quotas, additional responsibilities, and having to cover a larger area of work to harvest. These workers were put under increased pressure and fear that a single mistake could lead to losing their job.

We stand in solidarity with palm oil workers — and workers in every industry — as they demand an end to exploitation.

We work in partnership with labor unions and workers on the ground, bringing this message directly to the corporations we campaign against, and we always campaign for policies that safeguard human and workers’ rights in addition to the environment.

Over the years we have brought an incredible amount of people-powered pressure to bear on corporations and many have committed to policies intended to eliminate deforestation and human rights violations from supply chains. But what good is a paper promise if it isn’t followed up with action? We won’t quit until people and the planet are protected from exploitation and extraction. RAN's Community Action Grants provide crucial and rapid funding for people fighting in their own communities across the globe to protect millions of acres of forest, to keep millions of tons of carbon in the ground, and to protect the rights and self-determination of local communities. And you can be a part of this effort right now.

A Movement for Racial Justice

The fight against climate change, deforestation, and human rights abuses is inextricably linked to the fight for racial justice. Climate justice and racial justice are one in the same, and the environmental movement is not whole without bringing a racial justice lens to the forefront of fighting corporate power.