Ecuador’s Innovative Plan To Save The Yasuní In Jeopardy In 2007, Ecuadorean President Rafael Correa presented the Yasuní ITT Initiative to the United Nations General Assembly, declaring the country’s willingness to forego the exploitation of an estimated 846 million barrels of oil in order to preserve a large swath of the Ecuadorean Amazon. It is a bold and unprecedented plan but, unfortunately, its future is looking bleak.

Although the international community has been generally supportive of the plan, Germany, which had tentatively pledged over 50 million dollars in contribution to the initiative for the next ten years, withdrew its support this past week — putting the entire plan to protect the incredibly biodiverse rainforest in Ecuador’s Yasuní National Park in jeopardy.

Yasuní National Park is a 17,000-kilometer section of the Amazon Basin that was designated a UNESCO Biosphere Reserve in 1989 due to its unique biodiversity. However, this patch of pristine rainforest also has the misfortune of sitting on top of the country’s second largest supply of oil. The Yasuní ITT proposal would protect the area from oil exploitation indefinitely by asking the international community for a financial contribution of $3.6 billion, or half the market value of the oil beneath the forest floor, over the next 10 years. The funds would be administered by the United Nations Development Programme under an international trust fund and used by the Ecuadorean government for the development of sustainable energy, preservation of ecosystems and protected areas, reforestation, social development, and job creation.

Saving the Yasuní is in the interest of everyone inhabiting this planet, especially those most affected by climate change. Keeping this oil reserve underground will prevent over 400 million metric tons of CO2 emissions from being sent into our atmosphere — and that doesn’t even take into account emissions from the deforestation, colonization, and illegal logging that would follow the creation of roads by oil companies. 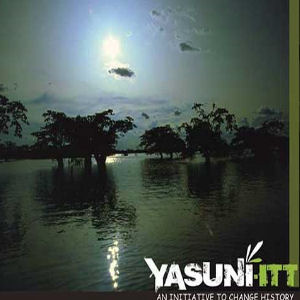 Germany was considered one of the strongest potential contributors, and its retreat has seriously endangered the entire Yasuní proposal. Chile and Peru have also consistently supported the initiative and pledged their financial support, but the lack of support and engagement from other countries has decreased the likelihood of the proposal’s success. In Ecuador, a few ministries and workers in the public sector are working towards gathering funds for the Yasuní project. This May, the National Secretariat for Planning and Development of Ecuador contributed $11,380 to the trust fund, a sum which falls far short of the $100 million required by the end of this year for the initiative to move forward.

After becoming the first nation to grant rights to nature under its constitution, Ecuador has been applauded by the scientific community for its pioneering efforts to enshrine the inherent value of the natural world in official policy. Yasuní National Park holds unparalleled scientific value in its biodiversity, and its forest people, the Huaorani, possess centuries of ancestral medicinal and environmental knowledge.

At this point, it seems wise to ask whether or not we can place all our bets on the international community stepping up to protect the Yasuní by the end of the year. It would also seem wise for the Ecuadorean government to at least seriously consider attempting to gather funds from private investors or philanthropic contributions from citizens worldwide. We must start thinking of new and innovative ways to save what’s left of our world’s rainforests and move beyond the use of oil as a fuel.