This year’s grades for the banks that finance the worst coal companies are in, and they’re not pretty.

Financing companies that use mountaintop removal (MTR) coal mining practices puts communities, the environment, and bank shareholders at risk. But last year, several banks continued to hand billions of dollars to top producers of mountaintop removal coal–earning themselves a big fat failing grade on our new report card—even while grassroots pressure has moved some of their competitors in the right direction.

The biggest failure is Barclays, the British banking giant and #1 financier of MTR coal last year. 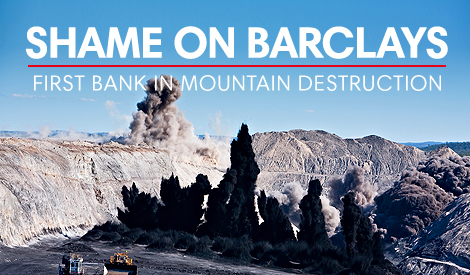 TAKE ACTION: Tell Barclays to stop financing the destruction of mountains and poisoning of communities for coal!

Coal financing isn’t rocket science, and the smart money is already getting out of MTR. By speaking out, you’ve made MTR financing a huge blemish for a big bank’s public image. Your activism has made U.S. and European banks, including JPMorgan Chase and BNP Paribas, cut ties with the worst MTR coal companies last year.

While some banks are learning that MTR coal is bad for business, today’s publication of our Coal Finance Report Card exposes Barclay’s as the slowest bank to grasp that lesson. It is financing a public health and environmental disaster, blowing up mountains and poisoning water with waste.

But we can move Barclay’s just like we are moving JPMorgan Chase and BNP Paribas.

Let’s start by making today the day that Barclays realizes that financing MTR could be one of the biggest mistakes it ever made.