For decades, climate change has been a global crisis that will impact every single person and living being on this planet. Now, according to the latest UN climate report, we have less than 10 years to cut global emissions in half.

Coal, tar sands, and fracked gas show everything that’s wrong within the fossil fuel industry. These extraction practices are harming people and planet every day, and big banks are fueling this destruction of the planet and negligence of life.

So what’s so bad about coal, tar sands, and fracked gas? Basically everything, from start to the finish these fossil fuels are disastrous.

The biggest coal companies in the U.S. have gone bankrupt in the past few years because coal is so clearly a bad investment for people and the planet.

Communities across the nation are already seeing and feeling the impacts of climate change, driven by carbon pollution, from increased health risks like asthma attacks and lung disease to devastating extreme weather events like Superstorm Sandy and wildfires across the American West, and the world.

Coal companies, and the banks that finance them, have felt the immense pressure from communities that are impacted by coal plants, and public health threats, and our own campaigns and partners. The science is clear: inaction will only increase these deadly and costly threats.

MTR debris is very toxic. The rubble that’s left after the coal gets picked out of it is full of mercury and heavy metals—and all of it gets pushed into the valleys and streams next to the blown-up mountain. And there is no coincidence to what communities feel the most impact of coal mines and the pollution they bring. People who endure the detrimental health impacts are primarily Black and Brown folks and poor, working class communities.

Coal mines are also an extremely dangerous place for workers. Countless, senseless, tragedies have occurred at coal mines, due to coal outbursts and fires, resulting in many lives lost. These disasters expose the horrific cost of “cheap” and dirty energy.  Miners’ deaths such as these are preventable. And then there are the long-term impacts. Every year, more than one million people die of air pollution that comes from burning coal. 150,000 more die from extreme weather events aggravated by climate change–and coal is the single biggest driver of climate change.

We must not continue to make these sacrifices in order to produce energy from such a dirty and unsustainable source. Coal is a dangerous and outdated fuel, and in the 21st century, we should not be using it to power our homes, schools, hospitals, and businesses. It is past time for us to shift our energy production to clean, safe renewable power. While coal is being phased out in the US, around the world it is still a huge piece of the fossil fuel industry that needs to end.

Tar sands oil is the worst type of oil for the climate.

Tar sands consist of heavy crude oil mixed with sand, clay, and bitumen. The extraction of tar sands includes burning natural gas to generate enough heat and steam to melt the oil out of the sand. As many as five barrels of water are needed to produce a single barrel of oil.

Tar sands oil is the worst type of oil for the climate, producing three times the greenhouse gas emissions of conventionally produced oil because of the energy needed to extract and process tar sands oil.

Across the United States, oil refineries are trying to get permits to expand their business to process heavy crude oil from the tar sands. Processing tar sands oil will mean more asthma and respiratory diseases, more cancer, and more cardiovascular problems. Many local communities are fighting these expansions every day.

In Canada, the toxic burden on communities near the tar sands is already enormous. In addition to direct human exposure, oil contamination in the local watershed has led to arsenic in moose meat—a dietary staple for First Nations peoples—up to 33 times acceptable levels, and drinking water has also been contaminated.

Indigenous people, and First Nation coalitions, are leading the fight against tar sands projects on their land that banks and companies are trying to steal for profit. We must break our addiction to oil and fossil fuels. Big banks need to stop investing in dirty fossil fuels and start funding the future.

“Natural Gas” (aka gas) has had an upswing in the last few years in the United States with fracking wells popping up across the country.

Despite the name “natural” gas is one of the most destructive types of fossil fuel. While it has a half life, methane is 84 times more potent than carbon dioxide in the first 20 years. This means, if we want to fight climate change fast, we absolutely must keep gas in the ground.

Also, the handful of ways you can transport gas are equally as destructive as burning the fuel. In order to pass gas through pipelines it must be liquified. Liquified natural gas (LNG) has an enormous impact on local communities, ecosystems and the climate. 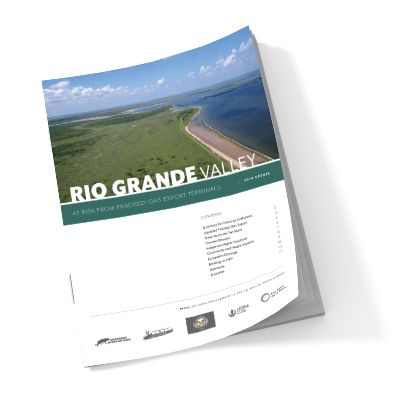 Read it now
View the whole library
LNG is piped to the coast, supercooled, and compressed into a liquid. Due to over-extraction from fracking, the U.S. faces an oversupply of natural gas. In search of new ways to use and profit off of this oversupply, fossil fuel corporations are now looking overseas. Enter the LNG export terminal, otherwise known as the “fracked-gas terminal.”

Companies are racing to build dozens of LNG export facilities across North America. Each of these facilities connects to a maze of pipelines that are fed from the fracking sites. LNG terminals span hundreds of acres and have ships, three football fields long, to carry the greenhouse-gas-intensive fuel to be burned in other countries.

There are 30 of these LNG facilities proposed or existing in the United States, with 77% along the Gulf Coast.

Exporting LNG is disastrous for the climate. In fact, three terminals, proposed in the Rio Grande Valley in Texas, would do the same annual damage to the climate as approximately 61 coal plants. And any inevitable leaking along the way releases methane, a super-potent greenhouse gas.

Just like coal and tar sands, banks that provide loans to construct these projects, or other financial support for companies building fracked-gas terminals, share responsibility for the impacts.

We demand banks defund climate change, and that means ditching coal, tar sands, and fracked gas for a just transition to renewable energy, for people and the planet. 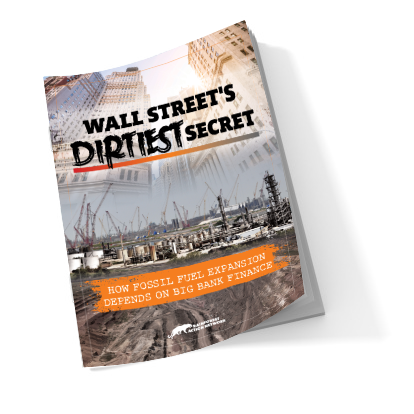