This small Indigenous community in Indonesia is fighting for its lands – and fights like these are key to keeping forests standing.

Indonesia’s rainforests have a critical role to play against global climate change and the crisis of global biodiversity loss. And the frontline forest communities standing in the way of destruction need our support now more than ever. The Pargamanan-Bintang Maria community in the province of North Sumatra, Indonesia, can trace their roots back to roughly 125 years ago. Three Indigenous Batak clans (Marga) — Sitanggang, Simbolon, and Lumban Gaol — migrated to the Lake Toba region during Dutch colonial times and were given land by the local ruler with the promise to never transfer their rights. This established the community’s customary rights to the land on which they settled, meaning land which is owned by Indigenous communities and administered in accordance with their customs.

The Indigenous lands of the Pargamanan-Bintang Maria community spans 1,763 hectares (4,356 acres) of mostly forest and is defined by natural landmarks, like two rivers named Aek Sihulihap and Aek Simonggo and the growth of particular plants. The forest plays a critical role in the health of the river that flows past it, ensuring clean and abundant water sources for the downstream communities in the area. The Batak Toba Indigenous Peoples have depended on the forest for generations — collecting forest fruits and vegetables, hunting for food, and traditionally harvesting the sweet resin from kemenyan (benzoin) trees which are uniquely native to the region. The community trades and sells the resin for other goods, as benzoin resin is used widely in perfumes, incense, medicine and as a flavoring for food. The benzoin forest (Tombak Haminjon in Batak) plays a spiritual, socio-economic and ecological function to the Indigenous Peoples around the Lake Toba Region.

The Pargamanan-Bintang Maria community’s forests, livelihood and way of life is now under threat as they wait to get legal recognition for their Indigenous land as hutan adat (legally recognized customary forest).

The Pargamanan-Bintang Maria community is one of at least 23 Indigenous Batak Toba communities that are in conflict with pulp and paper company PT. Toba Pulp Lestari (TPL) for developing on their lands.

In the early 1980s, Indonesia’s Forest Ministry handed out Batak customary lands as part of a concession given to a company known as Indorayon, which later changed its name to PT. Toba Pulp Lestari (TPL). As TPL cleared the land, it destroyed community forests, farms, and lucrative benzoin forests. According to the community, hundreds-of-years-old trees up to 3 meters (roughly 10 feet) in diameter were cut down during that time. As natural rainforests were cleared and converted to industrial pulp plantations, the planting of water-intensive eucalyptus trees dried up local rivers and caused a range of other negative social and environmental impacts 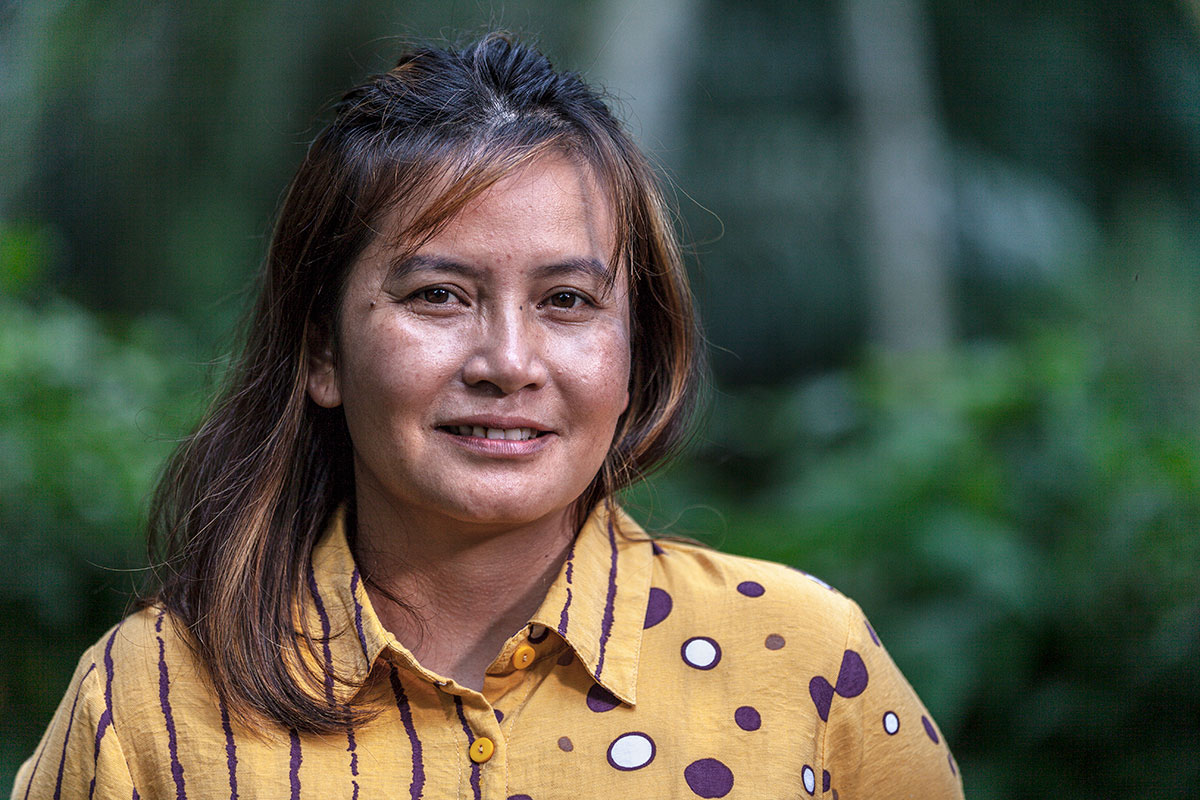 Delima Silalahi, Program Director of Kelompok Studi dan Pengembangan Prakarsa Masyarakat (KSPPM)
“In the ‘80s and ‘90s, until 1998, there was a lot of resistance by the community, especially in Toba, against TPL. The social movement at the time succeeded in temporarily shutting down TPL during [President] Habibie’s term, but then [President] Megawati reopened it with a new paradigm. Since its operations, there have been many intimidation and criminalization by TPL in the concession. [In a different community] Twenty-four people were named suspects and more than 40 people were arrested. There was much criminalization such as through intimidation letters, prohibiting communities from working in their farms, removing/pulling out community’s crops.”

These 23 Batak Toba Indigenous communities, including Pargamanan-Bintang Maria, and other groups have banded together under the Aliansi Gerakan Rakyat Tutup TPL (The People’s Movement Alliance to Shutdown TPL) and are demanding ancestral lands be returned. Their movement was successful in shutting down Indorayon in 1999, but the company returned. They are appealing to the government to shut it down once and for all. Rajes Sitanggang, Raja Huta (Village Chief) of Pargamanan-Bintang Maria
“Our demand from TPL is that they stop going into our customary land. Stay in the land they already have, not in our customary land. We will continue to cultivate our customary land like our ancestors did. That’s how the Indigenous community here lives. We know best about how to care for our forest, [other] people don’t know. So TPL, let it go. We are the stewards of our customary land. I am the Raja huta – I am the leader in the village. My grandmother was a founder of this village. To the day I die, [the land] will stay with my children for generations. It will not be given away.”

PT. Toba Pulp Lestari (TPL) is a pulp and paper company based in the Lake Toba region of North Sumatra, Indonesia. The pulp giant is associated with the Royal Golden Eagle (RGE) group through the Indonesian tycoon, and founder and chairman of the RGE group, Mr. Sukanto Tanoto. Despite these associations, TPL denies it is part of the RGE group.

RGE group is one of 10 agribusinesses named in the Keep Forest Standing Report that exposes the biggest companies and banks responsible for rights violations and deforestation.

Development on Indigenous land without Free, Prior, and Informed Consent

TPL allegedly started to develop within the community’s customary forest around 2003, and complaints have been made that not all affected community members were consulted or informed about the planned development. At the time, TPL’s activities were always accompanied by security guards and local law enforcement — a clear form of intimidation to discourage dissent. Community members were also intimidated by TPL’s employees, who told them “with or without your approval, we will clear the forest”.

Over 40 percent of the community’s land now overlaps with the company’s concession, with almost a third already developed into pulp plantations. The rest could be developed whenever the company wishes to do so. While some members of the community have accepted offers from the company; this should not be taken as consent to expand its plantations onto the customary lands of all the Indigenous Pargamanan-Bintang Maria communities in the area. As of October 2021, 23 Indigenous families of the community remain clear in their opposition against TPL plantation development on their lands.

In October 2021, the Indonesian government answered the calls of the People’s Alliance to Shutdown TPL and began to conduct verification of 18 Indigenous Batak Toba communities’ customary forests that overlap with TPL’s concession. This is a positive step in the pathway to legal recognition of these Indigenous communities’ customary land, including their customary forests. Unfortunately Pargamanan-Bintang Maria is not one of them and their customary land and forests are still under threat. We demand TPL to respect the rights of all Indigenous communities impacted by their operation, including ones that have yet to be legally recognized as customary lands and forests such as the Pargamanan-Bintang Maria community.

The Indigenous Pargamanan-Bintang Maria community’s opposition is being ignored by the RGE group, as TPL claims that it has resolved the conflict with the Pargamanan-Bintang Maria Community and reached an agreement to end their dispute on September 9, 2009. TPL also continues to deny acts of violence against the Indigenous Batak Toba communities carried out since 1998.

The Batak Indigenous Movement Alliance is calling for solidarity, will you answer the call? Shutdown PT. TPL and Give Back Customary Land to Indigenous Peoples in the Lake Toba Area

Together we can stop deforestation and combat climate change by joining Indigenous communities’ fight for their lands.

RAN is committed to the Jemez Principles and we follow Indigenous leadership in the land rights movement. To combat climate change and stop deforestation, land must be returned to Indigenous communities.

Special thanks to our partners in Indonesia