You’ve likely never heard of him, but Tim Sweeney just became a critical decision-maker when it comes to the fate of the fossil fuel industry’s global expansion plans. As of January 1, 2023, Sweeney is the new CEO of Boston-based insurance giant Liberty Mutual, which is one of the biggest coal, oil, and gas insurers in the world.

Without the policies that Liberty Mutual and other big insurers provide, new fossil fuel projects like offshore drilling rigs, liquefied natural gas (LNG) export terminals, and oil and gas pipelines, can’t be constructed. Liberty also invests $2.3 billion of its premiums – that’s the money it collects for car, home, and other insurance policies – into fossil fuel companies.

From day one, new CEO Tim Sweeney must choose: will he continue to unlock the fossil fuel industry’s plans to ramp up coal, oil, and gas extraction, or instead adopt policies to accelerate a just energy transition?

We teamed up with activists in Boston outside Liberty Mutual’s headquarters on Tuesday, January 3 to congratulate Sweeney on the new role and ask him if he will step up as a climate leader. We handed out flyers to employees headed into work and plastered posters around the area, with our questions: “Which side are you on, Sweeney?” and “What is your plan?”

Add your name to a petition urging Tim Sweeney to step up as a climate leader.

Do you work at Liberty Mutual or are you affiliated? Fill out our anonymous survey letting us know what you think about Liberty’s role in the climate crisis. 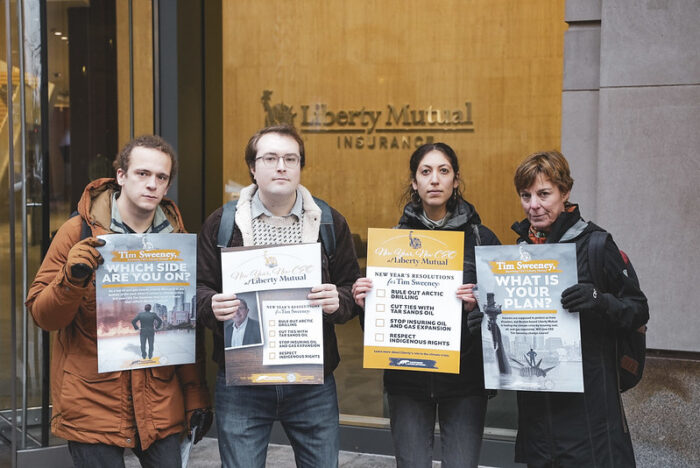 Our New Year’s Resolutions for Sweeney

With the first day of 2023 also Sweeney’s first day on the new job, RAN and partners are calling on him to adopt these New Year’s resolutions to ensure a safe and healthy planet for all:

With these resolutions, Liberty Mutual would catapult from being a global laggard on climate to a global leader. Insure Our Future’s sixth annual Scorecard on Insurance, Fossil Fuels, and the Climate Emergency, released in October 2022, found that Liberty Mutual’s fossil fuel insurance policies earned just 0.4 out of 10 points. Of 30 large insurance companies, it ranked near the bottom, even behind US peers like AIG and The Hartford.

But with Sweeney now in charge, Liberty has the opportunity to change course and demonstrate what real, credible action looks like.

Throughout his career, Sweeney has been a champion for diversity, equity, and inclusion (DEI) within Liberty. However, he’s yet to extend his DEI analysis to recognize that fossil expansion projects, in addition to climate impacts, disproportionately harm communities of color in the US and globally.

For years, frontline and Indigenous leaders have reached out to Liberty executives directly, asking to discuss the risks of projects Liberty is insuring or at risk of insuring on their lands, cultures, and livelihoods. They’ve been met with silence from the company.

It remains to be seen if Sweeney will live up to his DEI rhetoric and come to the table and listen to the communities who are being impacted by Liberty’s business decisions. As the leadership transition unfolds, we’ll be watching Liberty’s response on these specific projects very closely to see where Sweeney lands: An Opportunity for Bold Leadership

Sweeney isn’t the only new executive at Liberty Mutual. Alongside him, a team of Liberty Mutual senior officials moved into new roles at the start of this year, and they’ve clearly got their work cut out for them. Liberty is already taking an economic toll from the impacts of climate change, experiencing among the highest catastrophe losses among US insurers this year, due to Hurricane Ian and other climate-fueled disasters.

This should be an issue that hits close to home for Sweeney, who is from Lowell, MA, and works out of Liberty Mutual’s Boston headquarters. These flagship offices in Back Bay are at risk of flooding if temperatures warm beyond 3ºC, given how vulnerable large swaths of the city are to sea-level rise. As a company proud of its Boston roots, Liberty Mutual must tackle its contribution to the climate crisis to protect its own offices, its city, and the global climate.

Which side are you on, Tim Sweeney? Will you continue to enable the fossil fuel industry’s expansion agenda through Liberty’s insurance and investment portfolio, or will you step up in 2023?