Thank You From an Indonesian Frontline Activist 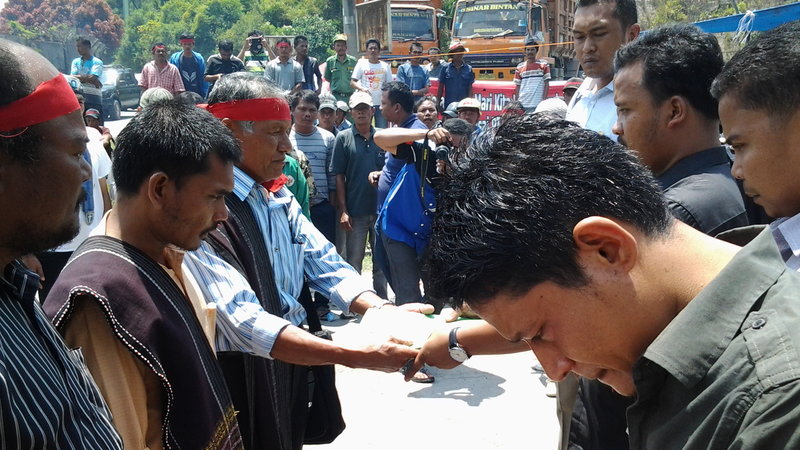 Last December, RAN circulated a petition in support of Indonesian movement leader Sammas Sitorus. Sammas Sitorus’ community of Lumban Sitorus, in North Sumatra, Indonesia, has been fighting for just compensation from pulp producer Toba Pulp Lestari (TPL), which stole the community’s land to build a massive pulp mill. The pulp that TPL produces in this mill is made into rayon, viscose, and modal fabrics; fabrics which may find their way into clothing sold by some of the biggest fashion brands in the United States.

Over the past year, the community of Lumban Sitorus has been holding regular non-violent protests outside of TPL’s mill. Then, in July 2015, the day after one of these community protests, Mr. Sitorus was arrested and wrongly accused of having attacked a TPL employee at the protest. He faced up to two years in prison, a threat that was widely seen as an effort to intimidate activists fighting against TPL.

RAN asked you, our members, to sign a petition demanding TPL drop the charges, and stop the criminalization of protest in Indonesia. Over 6,000 people took action and signed the petition. We sent the petition, along with a letter of support from RAN, to our partners at the local non-profit KSPPM, who delivered the petition to the judge.

Our advocacy worked, and Sammas Sitorus was found not guilty! It was a victory for Sammas Sitorus and KSPPM, and it was also a victory against Toba Pulp Lestari’s bullying efforts to criminalize community resistance. The judge specifically mentioned the petition, saying it was powerful to see that the international community cared about this case. Sammas Sitorus is now home with his family, and the movement to stop TPL’s unjust land grabs and human rights abuses continues strong.

Sammas Sitorus wanted to personally thank you — RAN’s members who signed this petition —  for the impact it had. Here are translated and edited excerpts from his letter:

To: All the supporters of the Rainforest Action Network

Greetings for justice and support of traditional community rights,

On February 10th, we received a final judgement in the case of Sammas Sitorus, a traditional community leader of the village of Lumban Sitorus, who had been accused of attacking an employee of Toba Pulp Lestari on the 14th of July, 2015.

The court released a verdict of NOT GUILTY. This verdict of NOT GUILTY represents a gift of justice not only for Sammas Sitorus but the community of Lumban Sitorus that, from the beginning, has known that this case was created just to weaken the fight to reclaim traditional land owned by this community. For 30 years, this land has been stolen by large companies. This case is nothing other than an effort to criminalize the traditional community of Lumban Sitorus.

This victory is most certainly due to the shared struggle and support from many allies, including the supporters of Rainforest Action Network (RAN). We are very proud of the support we received from all the people who shared their signature to the petition shared by RAN. This support has had a real impact and was very meaningful to the judge, supporting him in making a just decision.

Aside from this process of criminalization, the focus of our fight continues to be our rights to our traditional lands which have been stolen. We hope that God will bless this fight and also the fights of all who stand in solidarity.