The notorious Keystone XL (KXL) tar sands pipeline has hit yet another major legal roadblock. On Thursday November 8, a federal judge overturned President Trump’s approval of the project, finding the administration in breach of key environmental laws. While the ruling will cause, at the very least, a substantial delay to developer TransCanada’s plans, it does not ensure the death of the pipeline. Until TransCanada drops KXL, RAN will continue to campaign to hold up funding for the company. In particular we will continue to demand that its number one banker, JPMorgan Chase, stop renewing its credits for TransCanada.

Trump’s reversal of Obama’s rejection of the pipeline was one of his first acts as President. And like many of Trump’s other acts, it has now been ruled in court as lacking in any scientific or legal rationale. Judge Brian Morris of the US District Court for Montana said in his ruling that the Trump regime failed to present a “reasoned explanation” for their decision and “simply discarded” the impact of the 1,179-mile pipeline on climate change. KXL would carry 800,000 barrels of tar sands oil from Alberta to Nebraska, where it would then travel to refineries in the Gulf via existing pipelines.

The suit was filed by the Indigenous Environmental Network (IEN) and the Montana-based Northern Plains Resource Council. IEN explains that Morris concluded that Trump’s State Department:

Tom Goldtooth, IEN’s Executive Director, said, “This is a win for Lakota, the Oceti Sakowin and other Tribal Nations, for the water, and for the sacredness of Mother Earth. This decision vindicates what we have been saying all along: Trump’s approval of this pipeline was illegal, violated environmental laws and was based upon fake facts.”

This is without doubt a serious blow to TransCanada’s plans. But the ruling is far from being the stake through the heart that will definitively kill off this pipeline. The Trump regime or TransCanada may appeal the decision. If they cannot win an appeal, they will presumably try to come up with a new environmental assessment that ticks all the boxes that Judge Morris has accused them of ignoring in the past. This could take a few months, six months, a year . . . but at some point they may have an assessment that satisfies a federal judge, and then they would be able to get back to moving pipe.In recent months TransCanada has been transporting pipe, preparing staging yards for materials and equipment, and doing other preparatory work in Montana and South Dakota in anticipation of starting full-scale construction on KXL in 2019. But this court decision blocks any activities related to pipeline construction until the State Department has prepared a legally compliant environmental assessment of the project.

Until TransCanada announces that it is giving up its Keystone pipedream — and until it’s clear that no other pipeline developer will take up TransCanada’s role if they do drop out — project opponents will continue fighting this filthy project. In this fight, RAN is focusing on supporting the Indigenous nations along the pipeline route, and on cutting off the flow of funds that would allow the project to be built. We will continue to do so as long as it remains alive, or at least in the realm of the undead.

TransCanada is paying for the $8 billion pipeline from its corporate coffers, rather than from finance raised specifically for the project. RAN is intent on stopping banks from financing TransCanada as any money that goes to the pipeline company will facilitate the construction of KXL. We also are pushing banks to adopt and comply with policies – such as that adopted by French bank BNP Paribas in October 2017 — that would stop them financing tar sands pipeline developers.

JPMorgan Chase is the biggest funder of tar sands on Wall Street – RAN’s research shows that it poured nearly $11 billion into tar sands extraction and pipeline companies between 2015-2017, more than the next four biggest US tar sands banks combined. It is no surprise then that Chase is the lead in a consortium of banks that is deciding whether to renew $1.5 billion in credits for TransCanada on December 14.

RAN is urging Chase to listen to the Indigenous nations, landowners and environmentalists who have been fighting KXL for the past decade and turn off the credit spigot for TransCanada. Given the strong opposition from some of the tribal governments along the KXL route, by funding TransCanada Chase is in breach of its own policy on Indigenous People which states that they will respect their internationally recognized right for Free, Prior and Informed Consent. As the UN’s climate scientists made terrifyingly clear in their recent report on the need to keep warming below 1.5° Celsius, there is no more room in our climate budget for any new projects that increase supply of fossil fuels. No room for KXL, no Line 3, no more major pipelines of any kind. The Montana federal court has stopped KXL in its tracks for now, but we cannot rely on the judiciary alone to ensure the phase out of fossil fuels. Chase and other financiers also need to stand up and say no to TransCanada and other fossil fuel developers. RAN is committed to doing what we can to make this happen. 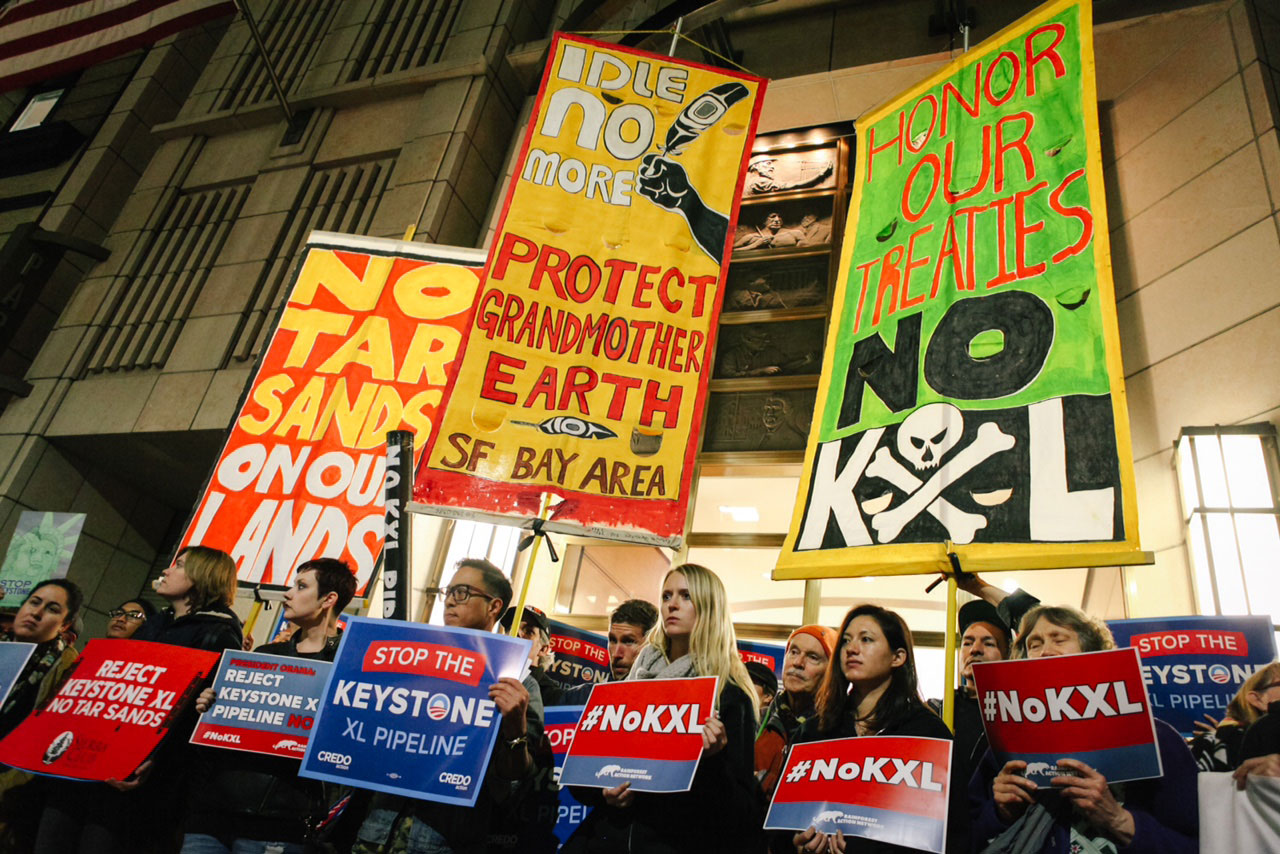 A Message of Indigenous Resistance and Inspiration From the Amazon

Stop the Olympics from destroying the rainforests