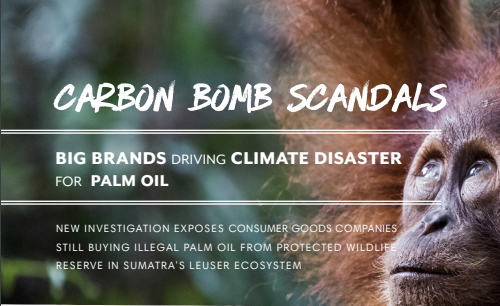 For immediate release; high quality images, aerial drone footage, and evidence from the field and supply chain investigations are available upon request.

Using evidence obtained through field investigations, satellite imagery analysis and supply chain research, RAN’s investigation proves that palm oil produced in this protected nature reserve, in violation of corporate deforestation-free commitments, continues to make its way into the products sold by Procter & Gamble, Mondelēz, Nestlé, Unilever, PepsiCo, Colgate-Palmolive, Ferrero, Nissin Foods and other CGF members. Other brands, such as Mars and Kao, continue to do business with the palm oil traders caught sourcing illegal palm oil from the reserve. Images published in the report show that illegal deforestation on carbon-rich peat swamps has persisted after the December 2015 cut-off date adopted by these brands and most CGF members.

“These lush, lowland rainforests of the Leuser Ecosystem contain a massive storehouse of naturally sequestered carbon and are the last line of defense against extinction for Sumatran orangutans and elephants, yet they are being decimated for illegal palm oil production,” said Gemma Tillack with Rainforest Action Network. “Enabling oil palm expansion in the deep peatlands of the Rawa Singkil Wildlife Reserve is like setting off a carbon bomb. But this is one climate disaster that can be avoided if brands like Procter & Gamble, Mondelēz and Nissin Foods fulfill their commitments to end deforestation and keep forests standing in the Leuser Ecosystem.”

For decades now, the destruction of Indonesia’s peatlands has been a globally significant driver of carbon pollution into the atmosphere. In the lead up to the Paris COP21 climate summit in 2015, fires from peatlands being cleared for palm oil production in the country were recorded to be spewing more carbon into the sky than the entire emissions of the United States combined. Since then, the multinational brands responsible for this climate catastrophe have issued new “Forest Positive” pledges and collective plans to end deforestation and address their role in driving climate change through their consumption of palm oil.

‘“Forest Positive” pledges are not being fulfilled on the frontlines of palm oil expansion in Indonesia, said Daniel Carrillo, Forest Campaign Director at Rainforest Action Network.  “Consumer Goods Forum members have failed to break their ties to illegal palm oil grown at the expense of carbon-rich peatlands inside the Rawa Singkil Wildlife Reserve since a similar scandal exposed by RAN in 2019.”

RAN is calling on the ten brands exposed in its report to immediately take action to invest in lasting solutions that protect the Singkil-Bengkung region from further destruction and end sourcing from rogue palm oil suppliers until transparent and verifiable monitoring, traceability and No Deforestation, No Peatland and No Exploitation (NDPE) compliance systems are in place.