Despite instructions from the President of Indonesia and the new Governor of Aceh to stop all land clearing for palm oil plantations, and despite an active conflict with a local community over land rights, RAN field investigators have documented continued forest destruction inside one of the most critical areas of the world-class Leuser Ecosystem, an area called Singkil-Bengkung.

The densely forested peat swamps found here are a global biodiversity hot spot within a region known as the ‘orangutan capital of the world’ because it is home to the highest population densities of the endangered great apes known anywhere. These lush lowland forests are also recognized by climate scientists as one of the most carbon-rich landscapes on earth. They are known to produce massive atmospheric pollution when they are drained and burned, as has been recorded here as recently as February of this year.

The recent forest destruction has been identified inside a concession managed by Conflict Palm Oil producer PT. Laot Bangko. Between May 25 and December 2017 a total of 13 hectares were cleared inside the concession. Clearing stopped for several months but resumed again in January 2018 when a further four hectares were cleared. In February 2018, fire hot spots were also recorded showing that the forests remain under threat.

As long as access to global markets is available for palm oil produced at the expense of forests and human rights abuses it will continue to be very difficult to find lasting solutions that resolve land conflicts and secure the protection of the Leuser Ecosystem. Intervention is needed by palm oil traders and brands that source from the palm oil mills in the region: PT. Indomas Mitra Teknik, PT. Samudera Sawit Nabati, PT. Bangun Sempurna Lestari, PT. Global Sawit Semesta, PT. Runding Putra Persada, PT. Nafasindo and PT. Ensem Lestari. These mills need to be instructed by the Snack Food 20 group of companies to adopt and enforce policies to not source from suppliers destroying rainforests, failing to resolve land conflicts or sourcing palm oil produced illegally within the Leuser Ecosystem.

It’s critical that the palm oil traders Wilmar, Musim Mas and Golden Agri Resources (GAR) that supply brands with palm oil produced at the expense of the Leuser Ecosystem intervene to stop this destruction and invest in the resolution of land conflicts and community-based protection and restoration of Aceh’s lowland rainforests. Photo Above and Below: In December 2017, field monitoring verified deforestation occurring in PT. Laot Bangko. GPS Coordinate of one location of recent clearance: 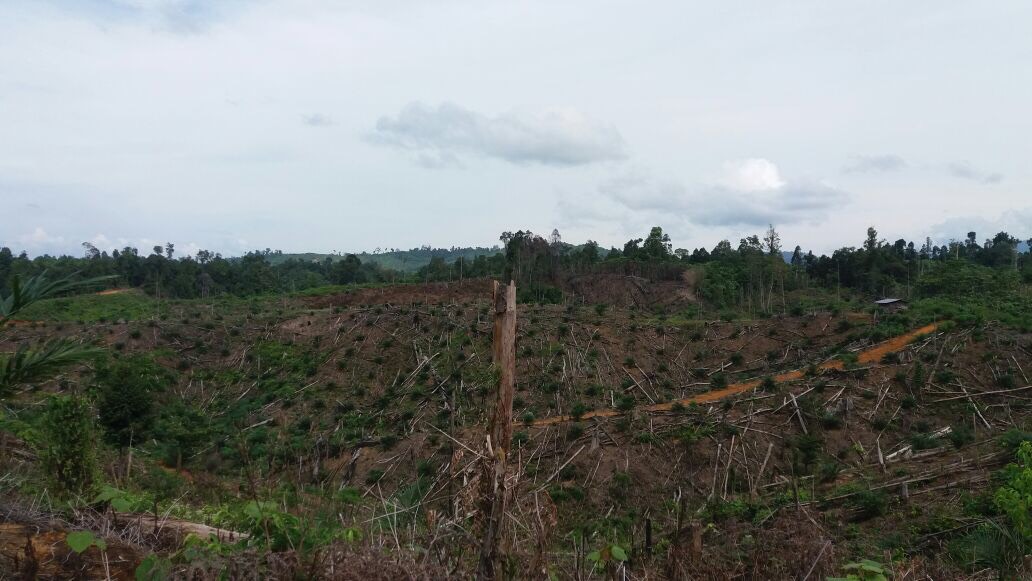 The Conflict Palm Oil company PT Laot Bangko obtained a permit covering 6,800 hectares. Nearly a third of the land is subject to a dispute with local communities that rely on the land to meet their daily needs. The director of the company has admitted that the company needs to resolve the conflict, but has not committed to handing back the land to the local community.

This case is a microcosm for deeply entrenched issues of land grabbing and rights violations that are rife and systemic across Indonesia where industrial palm oil plantation expansion occurs. It underscores the urgent need to do the hard work necessary to resolve long-standing land conflicts that have their origins in the business-as-usual practice of taking customary lands from communities and giving them to companies to exploit for new palm oil plantations.

It is critical that stakeholders come together to support national, provincial and district governments across Indonesia in efforts to revoke wrongfully issued palm oil permits and support alternative development pathways that secure community land rights. Incentives are needed for community-based protection and restoration of forests, especially along the borders of the Leuser Ecosystem. These valuable forests provide fresh clean water, sustainable livelihoods to the people of Aceh, are the last home for critically endangered wildlife species and safely store vast amounts of carbon, which benefits us all.