Where can you find an antelope the size of a rabbit, a snake that can fly, or a spider that eats birds? All in tropical rainforests, of course!

Q: Why do more animal species live in the rainforest than other parts of the world?

A: Scientists believe that there is a great diversity of animals because rainforests are the oldest ecosystems on earth. Some rainforests in Southeast Asia have been around for at least 100 million years, when dinosaurs roamed the earth. During the Ice Ages, the last of which ended about 10,000 years ago, the frozen areas of the North and South Poles spread over much of the earth, causing a high rate of animal extinction. But the giant freeze did not reach a number of refuges in tropical rainforests. Therefore, rainforest plants and animals continued to evolve, developing into the most diverse and complex ecosystems on earth.

The nearly perfect conditions for life also helped contribute to the great number of species. With temperatures constant at 75 -80 degrees F. year-round, animals don’t have to worry about freezing during cold winters or finding shade in the hot summers. They rarely have to search for water, as rain falls almost every day in tropical rainforests.

Some rainforest species have populations that number in the millions. Other species consist of only a few dozen individuals. Living in limited areas, most of these species are endemic, or found nowhere else on earth. The Maues marmoset, a species of monkey, wasn’t discovered until recently. Its entire population lives within a few square miles in the Amazon rainforest. It’s so small, it could sit in a person’s hand!

Q: Which type of rainforest species is most numerous?

A: If you were to visit a rainforest, you probably wouldn’t run into many jaguars or monkeys. The only living animals you could be sure to see are the millions of insects creeping and crawling around in every layer of the rainforest.

Scientists estimate that there are more than 50 million different species of invertebrates living in rainforests. One scientist found 50 different species of ants on a single tree in Peru! You would probably only need a few hours of poking around in a rainforest to find an insect unknown to science. You could even name it after yourself!

Insects are often beautiful and always fascinating. Have you ever heard of an ant that farms? Or ants that act as security guards? Leaf-cutter, or parasol ants, can rightfully be called the world’s first farmers. They climb trees up to 100-feet tall and cut out small pieces of leaves. They then carry these fragments, weighing as much as 50 times their body weight, back to their homes. Sometimes they need to travel 200 feet, equal to an average human walking about 6 miles with 5,000 lbs. on his/her back! The forest floor is converted to a maze of busy highways full of these moving leaf fragments.

These ants don’t eat the leaves they have collected, but instead bury them underground. The combination of leaves and substances that the ants produce such as saliva allows a type of fungus to grow. This fungus is the only food that they need to eat.

The perfect partnership – Azteca ants live on the Swollen Thorn Acacia Tree, which offers the ants everything needed for survival – lodging, water, and food for themselves and their young. In return, the ants protect the trees from predators. Whenever the ants feel something moving at the foot of the tree, they rush to fiercely fight the intruder. They also protect it from vines and other competing plants that would otherwise strangle it. As a result, nothing can grow near these trees. They are the only trees with a built-in alarm system!

Q: How do all these species manage to live together without running out of food?

A: The constant search for food, water, sunlight and space is a 24-hour pushing and shoving match. With this fierce competition, you may be amazed that so many different species of animals can all live together. But this is actually the cause of the huge number of different species.

The main secret lies in the ability of many animals to adapt to eating a specific plant or animal, which few other species are able to eat. Have you ever wondered, for instance, why toucans and parrots have such big beaks? These beaks give them a great advantage over other birds with smaller beaks. The fruits and nuts from many trees have evolved with tough shells to protect them from predators. In turn toucans and parrots developed large strong beaks, which serves as a nutcracker and provides them with many tasty meals.

Q: Do animals ever help each other out?

A: Many animals species have developed relationships with each other that benefit both species. Birds and mammal species love to eat the tasty fruits provided by trees. Even fish living in the Amazon River rely on fruits dropped from forest trees. In turn, the fruit trees depend upon these animals to eat their fruit, which helps them to spread their seeds to far-off parts of the forest.

In some cases both species are so dependent upon each other that if one becomes extinct, the other will as well. This nearly happened with trees that relied on the now-extinct Dodo birds. They once roamed Mauritius, a tropical island located in the Indian Ocean. They became extinct during the late 19th century when humans over-hunted them. The Calvaria Tree stopped sprouting seeds soon after. Scientists finally concluded that, for the seeds of the Calvaria Tree to sprout, they needed to first be digested by the dodo bird. By force-feeding the seeds to a domestic turkey, who digested the seeds the same way as the Dodo birds, the trees were saved. Unfortunately humans will not be able to save each species in this same way.

Q: How do rainforest animals protect themselves?

A: Every animal has the ability to protect itself from being someone’s next meal. Each species has evolved with its own set of unique adaptations, ways of helping them to survive.

BLENDING IN The coloring of some animals acts as protection from their predators. Insects play some of the best hide-and-go-seek in the forest. The “walking stick” is one such insect; it blends in so well with the palm tree it calls its home that no one would notice it unless it moved. Some butterflies, when they close their wings, look exactly like leaves. Camouflage also works in reverse, helping predators, such as boa constrictors, sneak up on unsuspecting animals and surprise them.

The three-toed sloth is born with brown fur, but you would never know this by looking at it. The green algae that makes its home in the sloth’s fur helps it to blend in with the tops of the trees, the canopy, where it makes its home. But green algae isn’t the only thing living in a sloth’s fur; it is literally “bugged” with a variety of insects. 978 beetles were once found living on one sloth!

STAYING OUT OF SITE The sloth has other clever adaptations. Famous for its snail-like pace; it is one of the slowest-moving animals on earth. (It can even take up to a month to digest its food!) Although its tasty meat would make a good meal for jaguars and other predators, most do not notice the sloth as it hangs quietly in the trees, high up in the canopy.

ARMED AND DANGEROUS Other animals want to announce their presence to the whole forest. Armed with dangerous poisons used in life-threatening situations,their bright colors warn predators to stay away.

The coral snake of the Amazon, with its brilliant red, yellow, and black coloring, is recognized as one of the most beautiful snakes in the world, But don’t admire its beauty too long; its deadly poison can kill within seconds

The poison arrow frog also stands out with its brightly colored skin. Its skin produces some of the strongest natural poison in the world, which Indigenous people often use for hunting purposes.

Another animal with no friends is the hoatzin. Often called the stinkbird, it produces a horrible smell to scare away potential predators.

Q: Is it true that dozens of animal species a day become extinct in tropical rainforests?

A: An average of 137 species of life forms are driven into extinction every day in the world’s tropical rainforests. The forces of destruction such as logging, cattle ranching have all contributed to the loss of millions of acres of tropical rainforest. Animals and people alike lose their homes when trees are cut down. These animals are given no warning to move – no time to pack their bags – and most die when the forest is destroyed.

Many large mammals such as leopards and apes need miles and miles of territory to roam and have a tough time surviving in the smaller and fragmented habitats they are forced into by humans. Other species such as the golden toad, whose entire population lives on one mountain in Costa Rica, could become extinct within seconds from a bulldozer’s crush.

When rainforests are destroyed, animals living outside the tropics suffer as well. Songbirds, hummingbirds, warblers and thousands of other North American birds spend their winters in rainforests, returning to the same location year after year. Less return north each spring, as few make it through the winter because their habitat has been destroyed.

The cutting down of trees is not the only reason for species extinction. Thousands of monkeys and other primates are traded illegally on the international market each year, wanted for their fur, as pets, or for scientific research. Parrots and macaws have also become popular pets; buyers will pay up to $10,000 for one bird. Even the king of the jungle, the jaguar, is in danger of becoming extinct. Its fur is highly valued for use on coats and shoes.

Pollution from mining has killed fish populations in the mighty Amazon River. Many Indigenous people, who have depended on these fish for centuries, have become sick from the poisoned fish.

Extinction is a natural process. Species like the saber-toothed tiger have died off from their failure to adapt to a changing environment. Others like the dinosaurs died off due to a catastrophe such as a comet or asteroid striking the earth. But today humans are altering their habitats too quickly for animals to adapt. So many species become extinct in such a short period of time, that the impact of the industrial age can be compared to the catastrophe of a comet strike on the diversity of life.

Humans must share the earth with all plants and animals; otherwise our carelessness will result in the continued extinction of many species. It would be a sad world indeed without the beauty of a toucan or the grace and power of the jaguar.

Aye-Aye: a primate from Madagascar, whose most unique features are its one long finger and giant eyes. It uses its finger to pull out hard-to-reach grubs from trees to eat, and its eyes to see better at night.

Endemic: plant and animal species living only in a certain limited area.

Invertebrates: species such as spiders, beetles and other insects who have no backbone.

Okapi: timid animals related to the giraffes who only live in the Congo river basin in Africa.

Primates: an order in the animal kingdom; species include monkeys, apes and human beings. 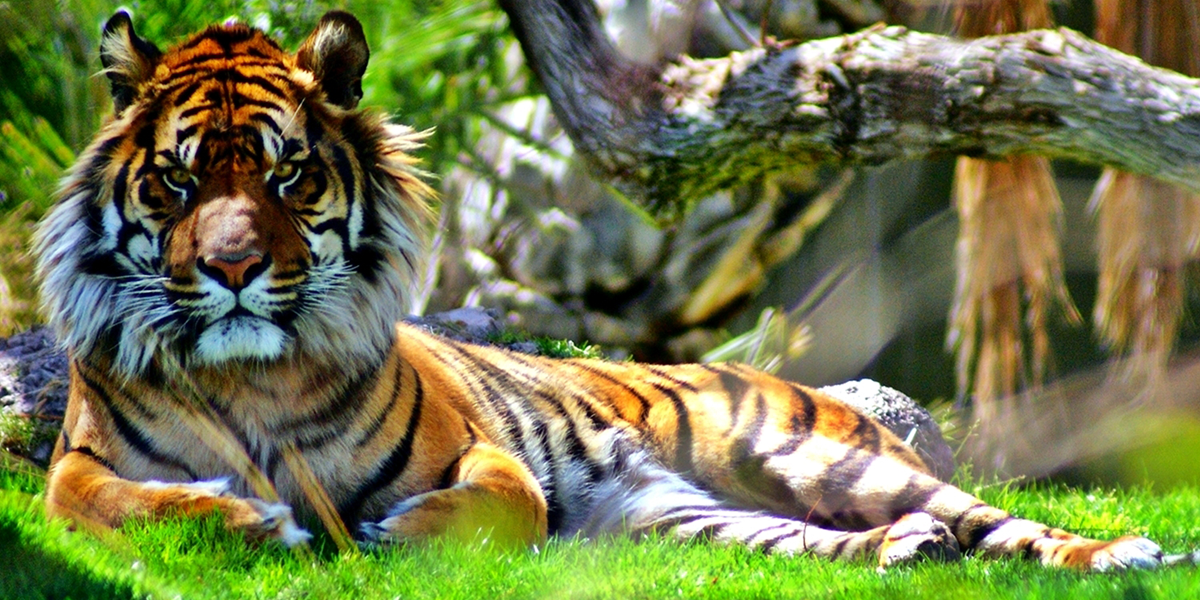