In 2007, very few people outside the food and agriculture industries were even aware of palm oil. But Rainforest Action Network recognized the massive threat that this innocuous seeming vegetable oil posed to rainforests across the world. That’s why RAN launched an ambitious campaign targeting agribusiness giant Cargill, the world’s largest privately held company and the biggest importer of palm oil into the United States.

Of course the problem is not palm oil itself — the problem is the way it is produced at the expense of people and planet. As the food industry moved away from trans fats, the demand for cheap palm oil skyrocketed. It can now be found in roughly half of all packaged goods in your local grocery store, from cookies and crackers to toothpaste and laundry detergent.

RAN coined the term “Conflict Palm Oil” to designate the horrendous practices far too often behind the harvesting and producing of this commodity: the forceful removal of local communities from their land, rampant workers’ rights abuses and violations of child labor laws, rainforests being mowed down and burned for plantations, the massive climate impact of peatland destruction, and endangered species pushed to the brink of extinction as their last remaining habitat was being destroyed in the process.

After seven years of shifting tactics and non-stop pressure, Cargill’s CEO announced one of the most far-reaching zero deforestation commitments ever established during the September 2014 UN Climate Summit. This commitment covers Cargill’s sprawling global empire of commodities, including palm oil, sugar, soy, cattle, and cocoa.

This commitment marks the beginning of a long journey toward implementation and accountability — the on-the-ground reforms that will bring about the changes so desperately needed for communities, orangutan populations and rainforests. But it is also a momentous milestone that is part of a much larger sea change taking place across the palm oil industry. And the only reason it is happening is because of the perseverance and support of people like you.

So, we wanted to take a moment to pause and say THANK YOU. And we wanted to share a series of images that not only tell the story of how we got to this point but that give us energy to hold strong and see to it that these promises are kept — from the forest floor to the grocery store.

In the fall of 2007, RAN launched a bold campaign calling on US agribusiness giants ADM, Bunge and Cargill – dubbed “The ABC’s of Rainforest Destruction” – to clean up their dirty palm oil supply chains. To announce the start of this campaign and to bring media attention to this untold story, activists climbed the Chicago Board of Trade building and deployed a massive banner during business hours. 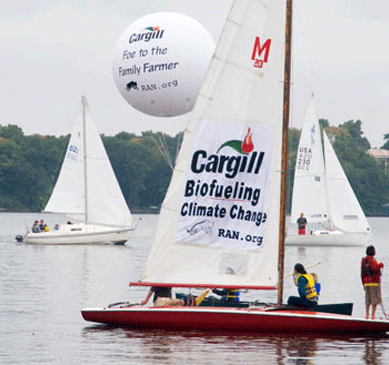 RAN then brought the message of Indonesian rainforest destruction to Cargill’s backyard by turning an M-20 sailboat into a floating banner. RAN entered the boat into a regatta on Lake Minnetonka, just down the road from Cargill’s world headquarters in Minnesota 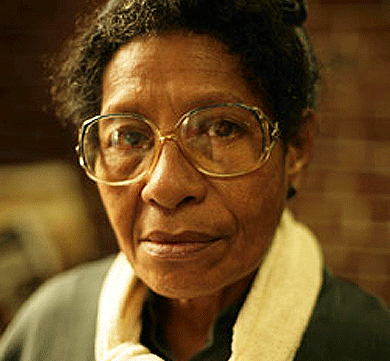 To communicate the urgency of this distant issue to U.S. executives, RAN organized a delegation that brought frontline representatives from communities direclty impacted by palm oil expansion to personally tell their stories to Cargill industry leaders in Boston and Minneapolis. These activists included Matilda Pilacapio, a former provincial government official and human rights advocate from Papua New Guinea. 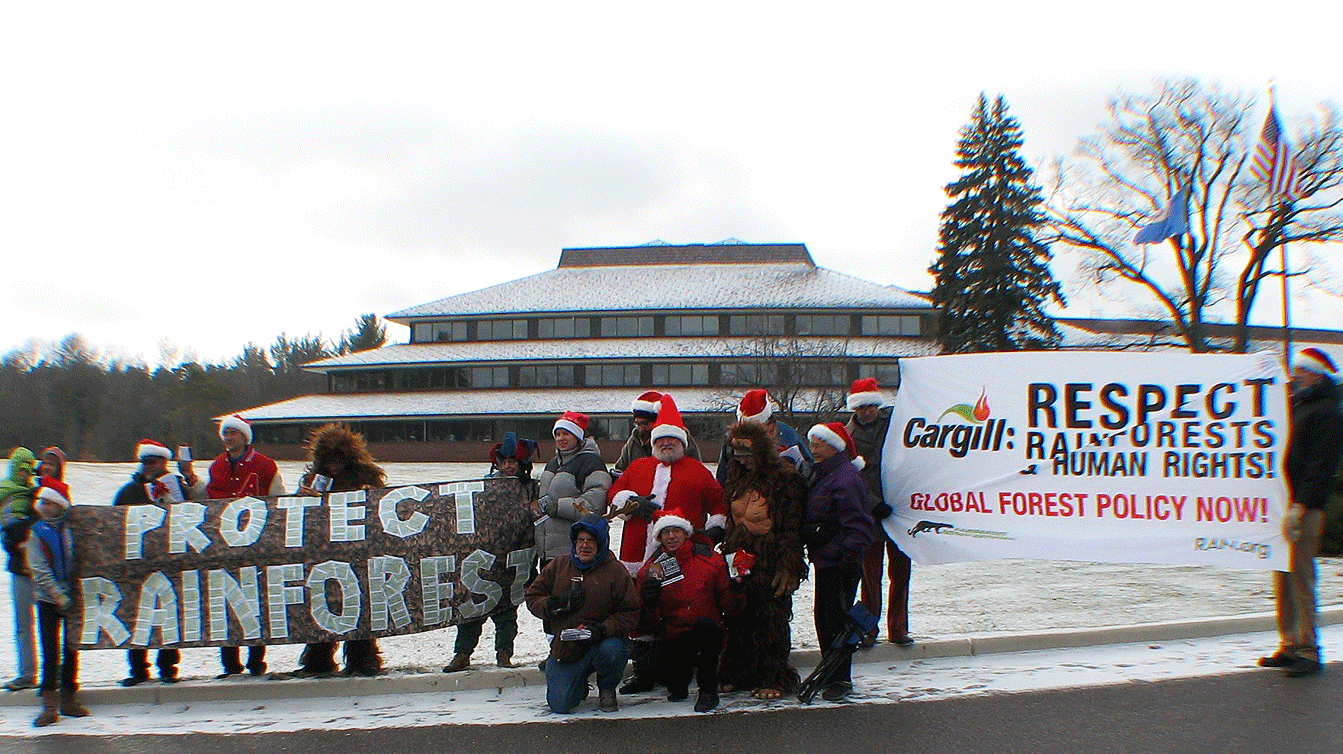 RAN activists next joined with members of the Walker Church and the Minnesota Fair Trade Coalition to deliver more than 5,000 petitions to Cargill for Christmas 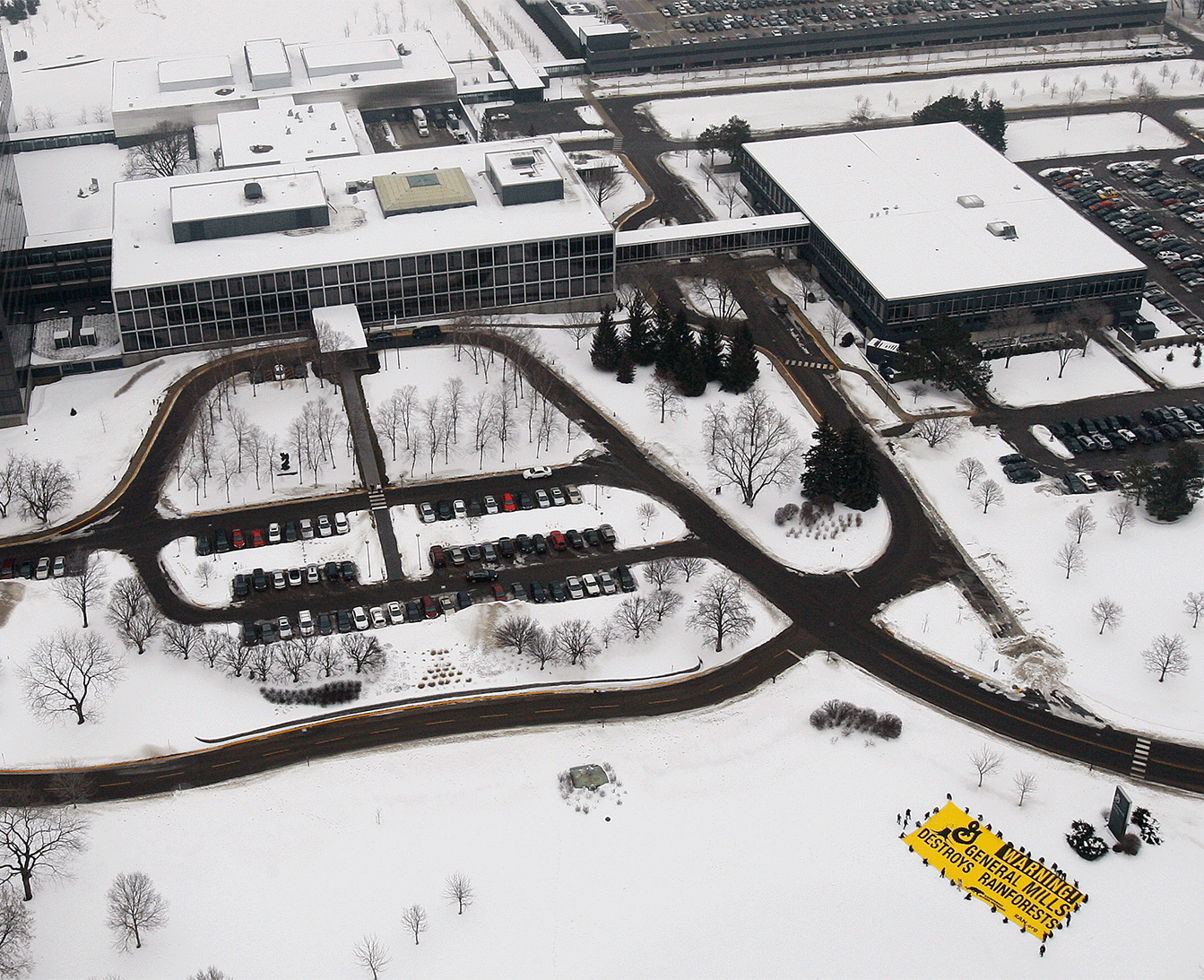 Switching gears in a bid to get Cargill’s attention, RAN turned its sights to one of Cargill’s key palm oil customers, General Mills. Forty two activists unfurled a 30 x70 ft. banner in the snow in front of the General Mills’ headquarters, announcing a new campaign to increase the pressure on Cargill to start sourcing responsible palm oil.

(By the end of 2010, General Mills adopted what was at the time the most far reaching corporate palm oil commitment from a U.S. company to date.) 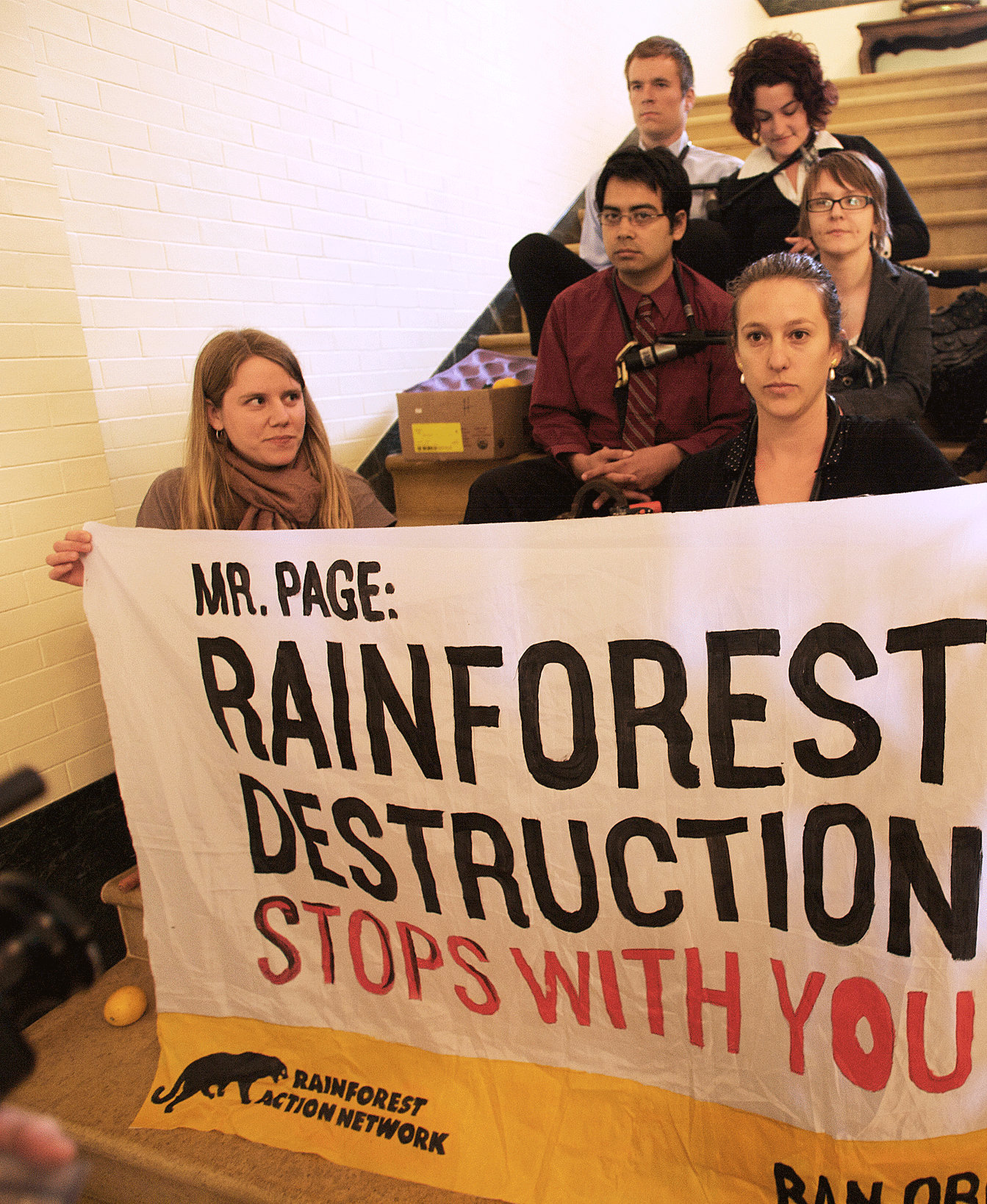 RAN authored and released a scathing public report linking Cargill directly to the destruction of Indonesia’s rainforests. RAN activists then conducted a dramatic direct communication that Cargill’s leadership could not ignore: activists locked themselves by locking down to a central staircase inside Cargill’s executive offices, shutting down business while broadcasting a recording of actual Cargill chainsaws cutting down Indonesian rainforests for palm oil. 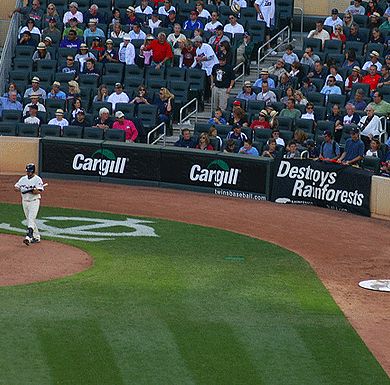 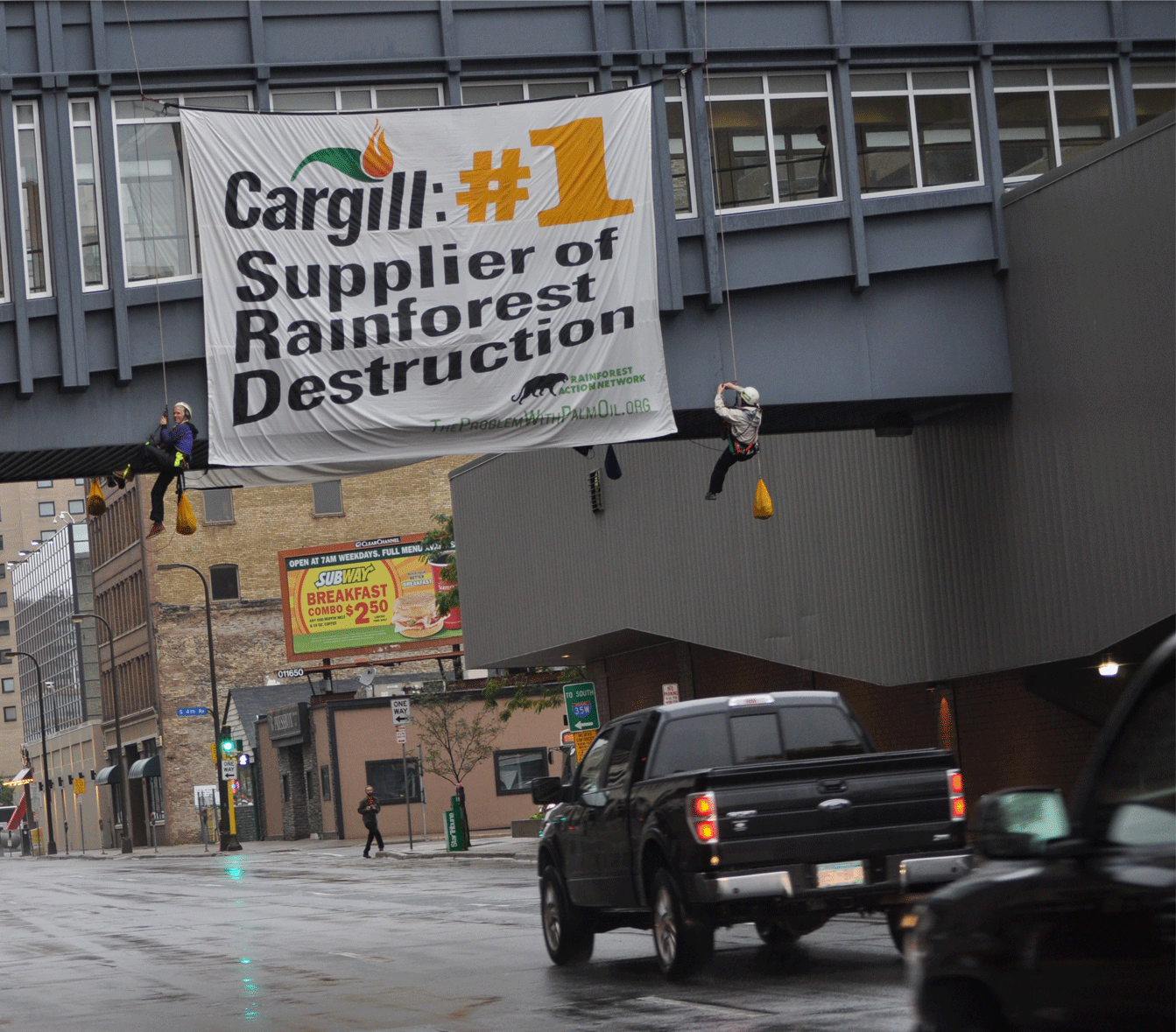 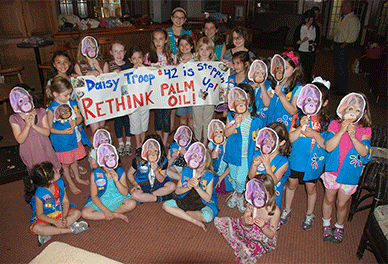 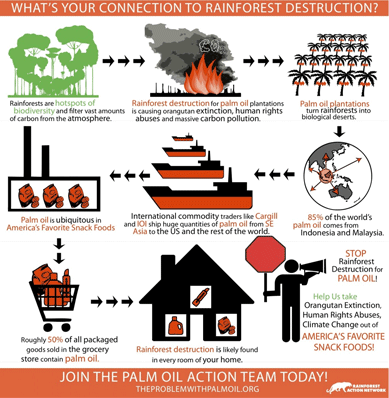 After Cargill announced a weak commitment to source RSPO-certified “sustainable palm oil” by 2020 – which was clearly inadequate to stop rainforest destruction, carbon pollution and human rights abuses – RAN released this popular infographic detailing Cargill’s direct role in bringing Conflict Palm Oil across the planet and into nearly every room of most American homes. 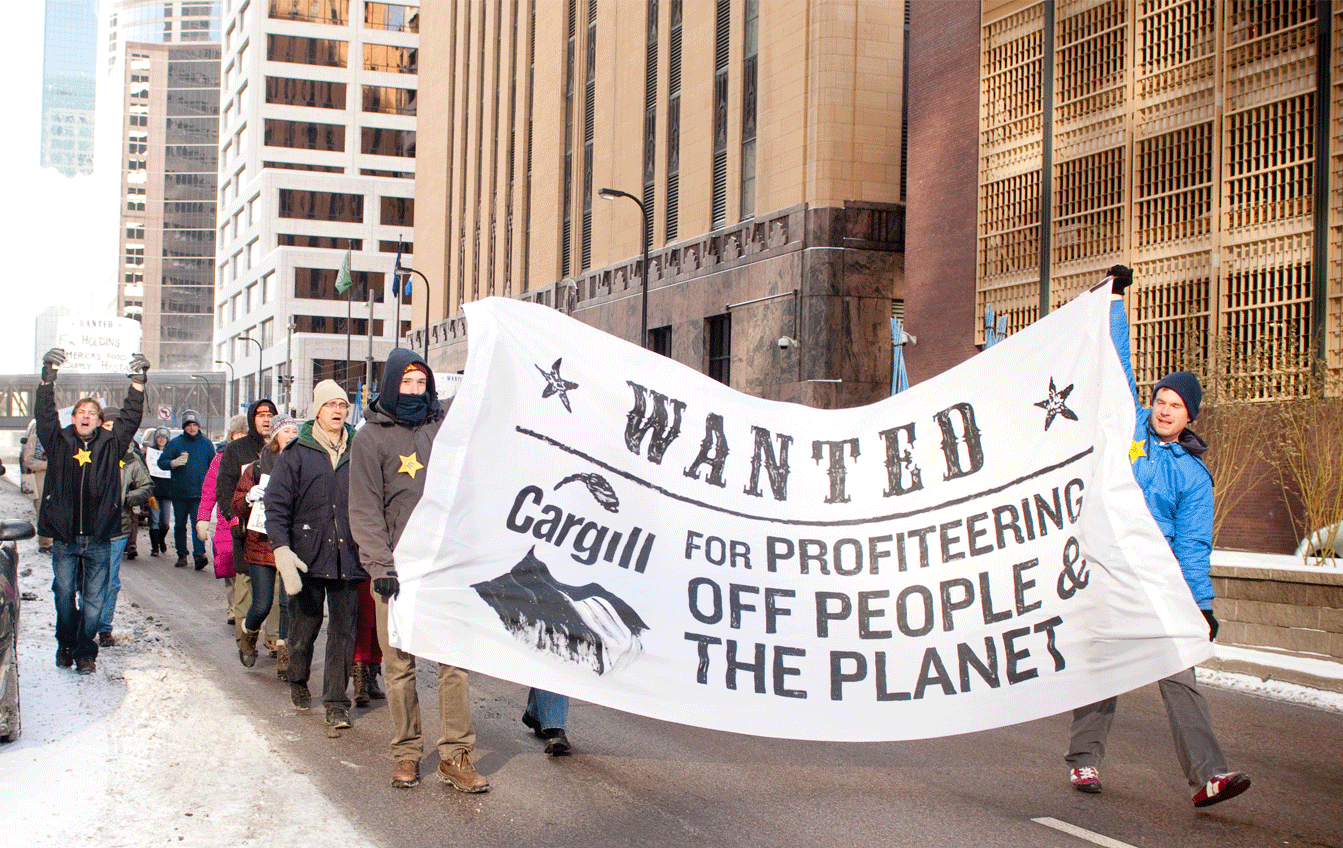 Dozens of people marched through below-freezing temperatures to the Minneapolis Grain Exchange to post an arrest warrant for Cargill, where a crowd of Occupy activists, food justice advocates, farmers, and anti-corporate-personhood protesters called on Cargill to clean up its dirty palm oil supply chains. 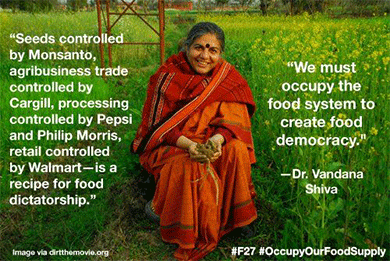 Connecting Cargill’s destructive practices to the larger food justice movement, RAN organized a global day of action called Occupy Our Food Supply to focus resistance on the corporate consolidation of our food system. More than 100 events took place across the world that brought together 60-plus groups from the Occupy movement and 30 environment and food organizations. Prominent leaders including Vandana Shiva, Willie Nelson and Woody Harrelson joined RAN to call on Cargill and Monsanto to stop wreaking havoc on our food system. 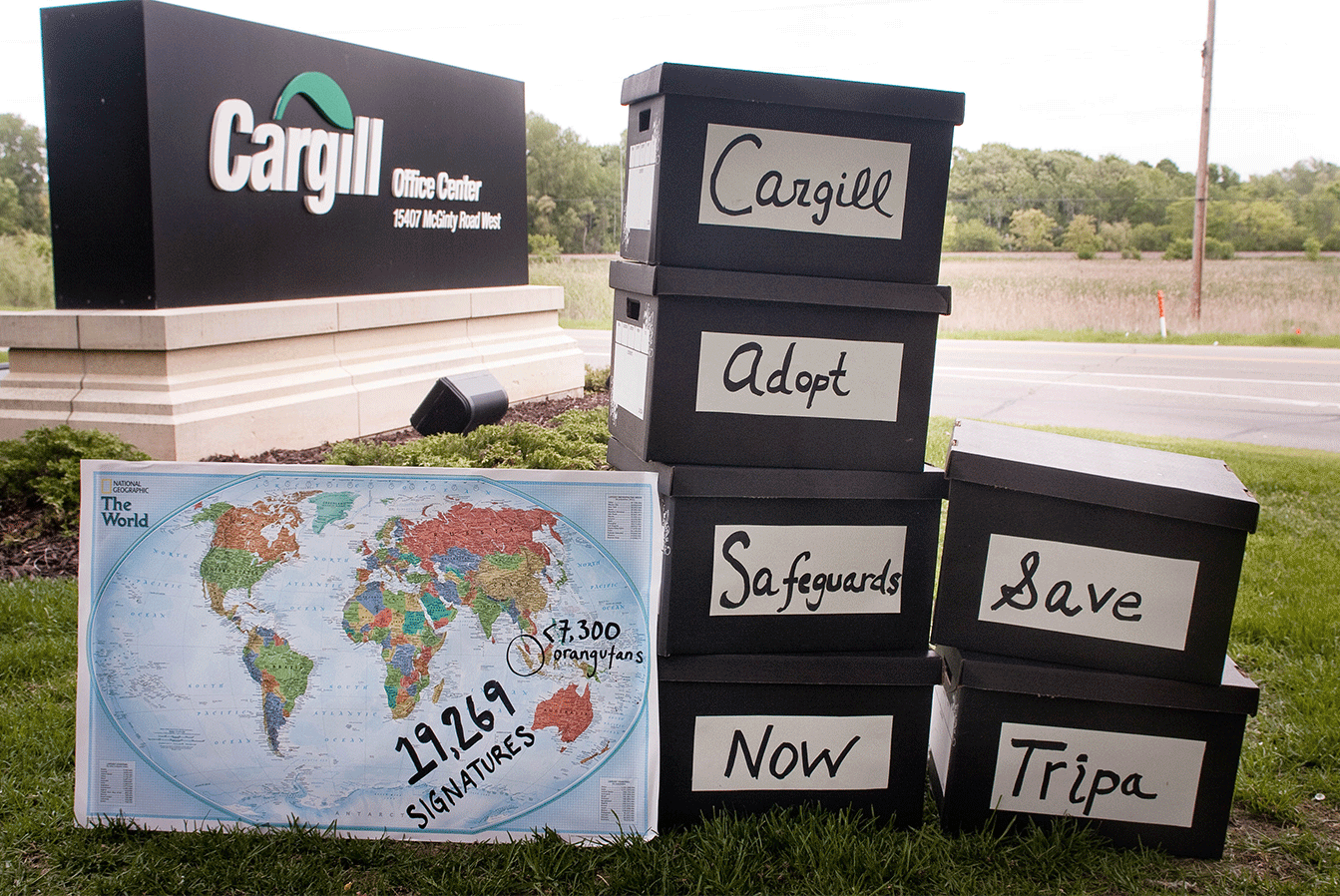 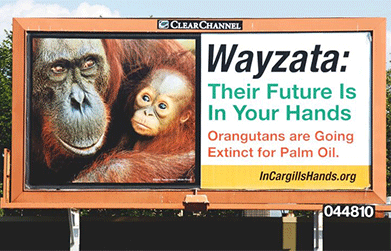 RAN then launched a regional blitz-advertising campaign, saturating Cargill’s hometown with the urgent problem of orangutan extinction. The Cargill family, community members and employees were reached through direct mail to executive’s neighborhoods, full page ads in local papers and statewide magazines, oversize ads on the Minneapolis City Pages racks and this prominent billboard outside a golf resort popular with Cargill executives. 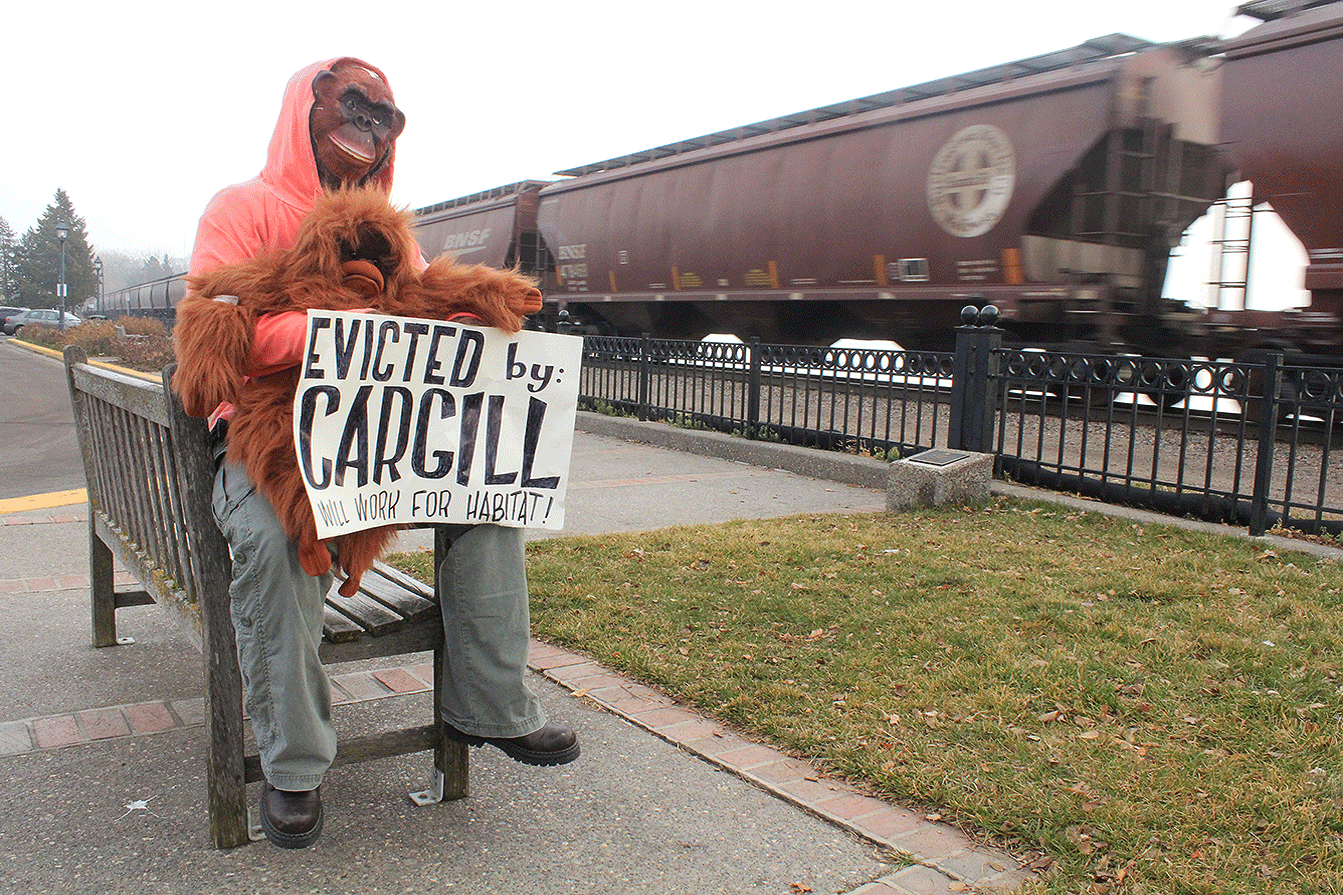 Employing dark humor to bring home a serious message, RAN engineered a mock invasion of rogue, homeless orangutans around Cargill’s small Midwestern hometown of Wayzata, MN. In a moment of surreal hilarity, Cargill’s security agents argued with and then arrested a hitchhiking mannequin just days before a mother and her baby (mannequin) were arrested and placed in a squad car by nearby Wayzata police. 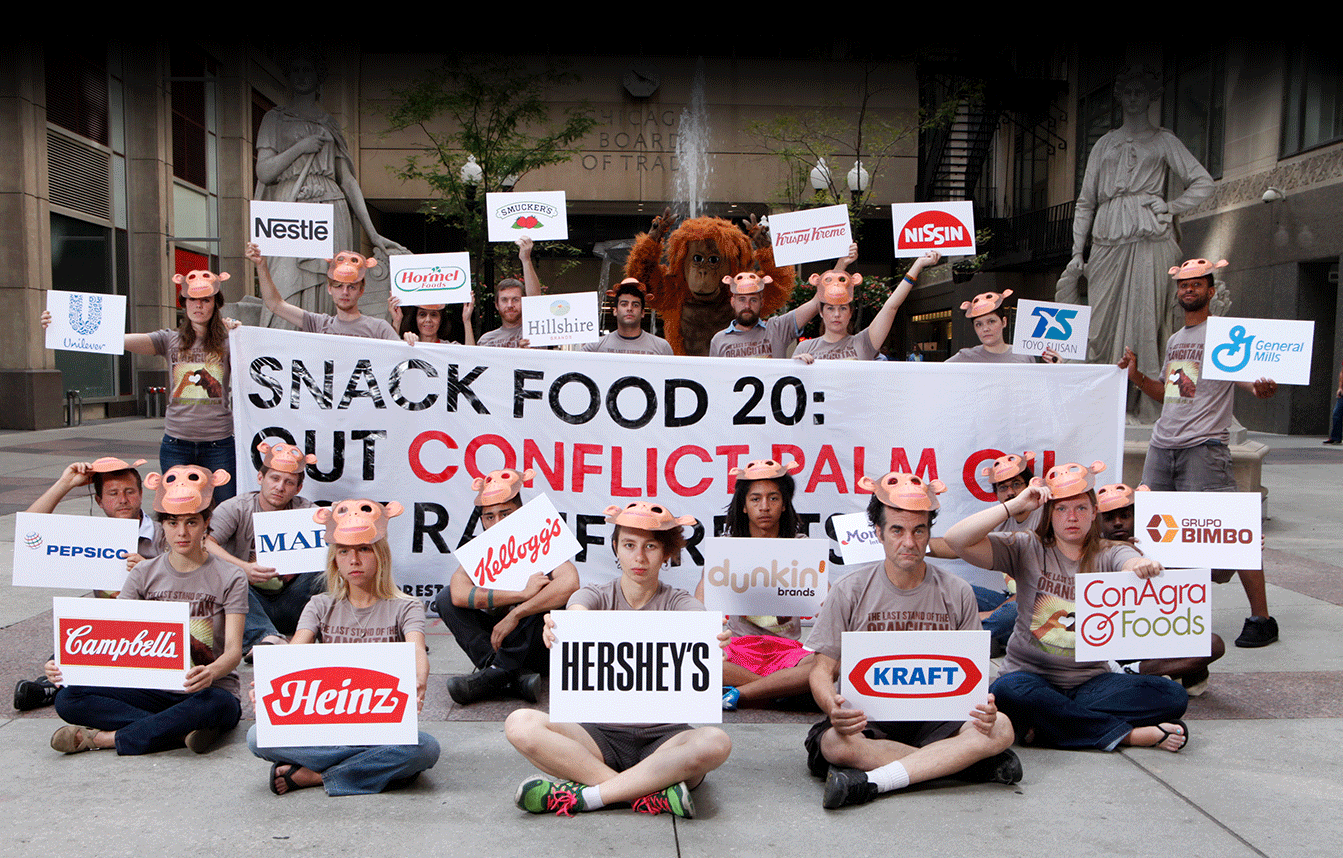 Determined to double down on our efforts, RAN Launched a bold new campaign targeting many of Cargill’s largest corporate customers. Called The Last Stand of the Orangutan, this campaign to root out Conflict Palm Oil targeted twenty multibillion dollar international brands simultaneously – dubbed “The Snack Food 20” group of companies. 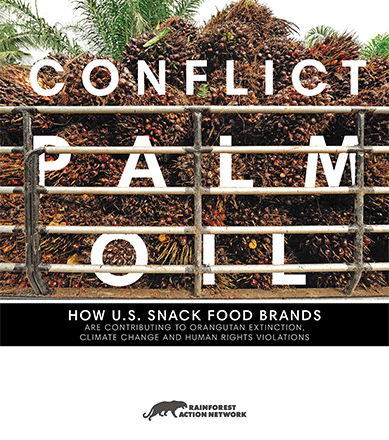 In what would become an authoritative reference for the movement for responsible palm oil, RAN released a comprehensive report on Conflict Palm Oil detailing the scope of the crisis within Cargill’s palm oil supply chains and outlining exactly what Cargill and its customers must do to eliminate Conflict Palm Oil. 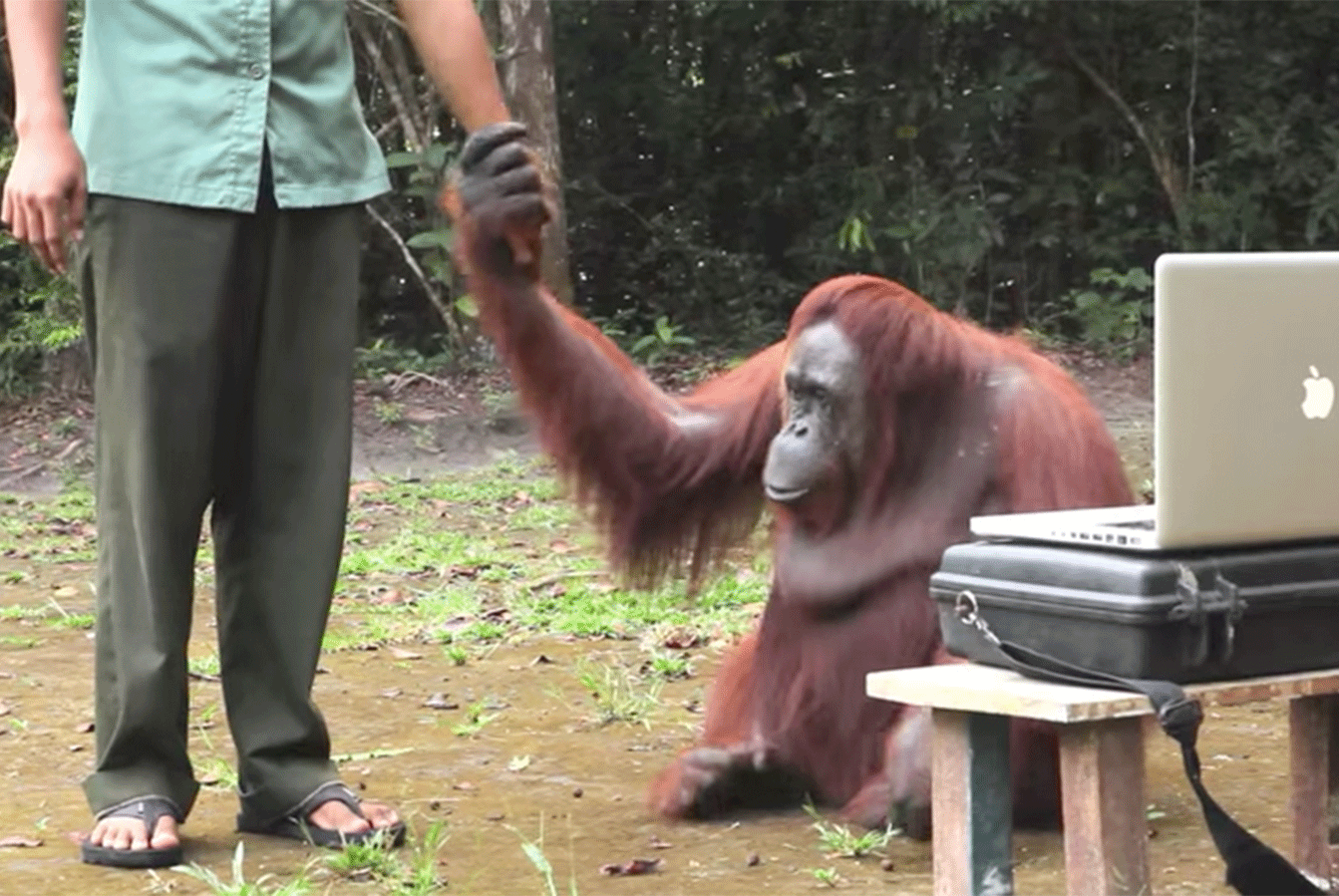 To ratchet up pressure on our Snack Food 20 targets and ignite a national conversation about the scandal of Conflict Palm Oil as a hidden ingredient in America’s foods, RAN teamed up with Free Range Studios to produce this compelling short video. With aggressive promotion, the video went viral on the web and appeared on the cover of Huffington Post, UpWorthy etc. and now has nearly a million views 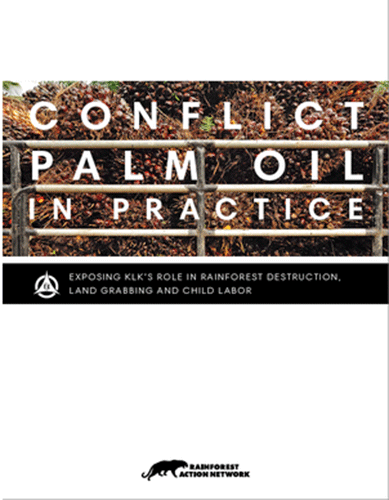 To highlight the stakes involved, RAN released a report profiling KLK, one of the most notorious producers of Conflict Palm Oil, and a key supplier to Cargill. The report demanded Cargill meet or beat the progress of other traders and implement a responsible palm oil sourcing policy that blacklists any company that produces Conflict Palm Oil and engages in human rights and environmental abuses. 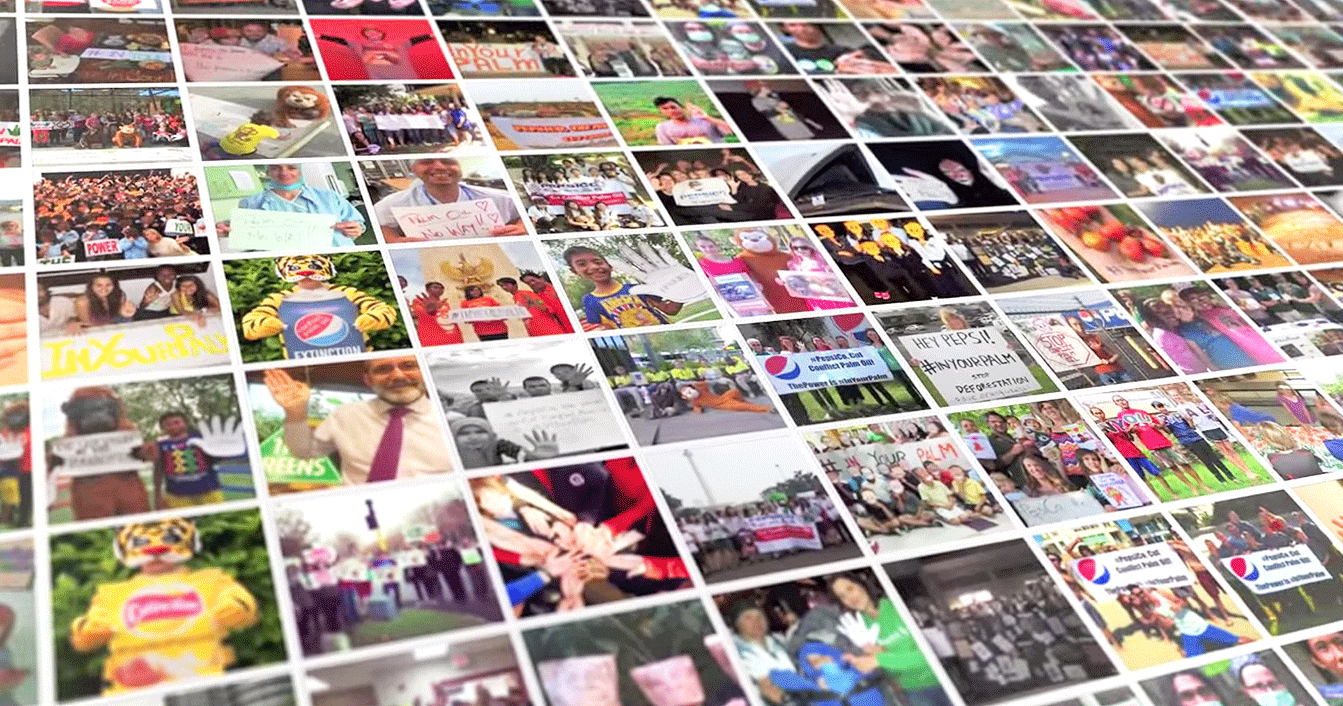 In the biggest display of people power demanding responsible palm oil to date, RAN orchestrated a Global Day of Action to Cut Conflict Palm Oil in May of 2014. Thousands of people across the world participated in hundreds of actions to send a clear message to Cargill, PepsiCo and the Snack Food 20: The Power is #InYourPalm to eliminate Conflict Palm Oil, and the time to do it is now.

Cargill finally committed to take responsibility for its Conflict Palm Oil problem in the summer of 2014. Shortly thereafter, at the UN Climate Summit in NYC, Cargill issued a sweeping zero deforestation commitment that extended this pledge to all its commodities across its sprawling global operations. The 2030 deadline set is not ambitious enough to meet the urgency of the crisis and it is too soon to measure how earnestly Cargill is implementing this commitment down to the plantations where palm oil is grown.

But for the moment, it is well worth acknowledging that the years of work by supporters and activists like you has set a new global benchmark for what practices are acceptable in palm oil production, and the biggest companies in the world are feeling the heat to catch up to their peers and root out Conflict Palm Oil from their supply chains for good. RAN will be watching closely and continuing to expose suppliers who violate human rights, clear rainforests or develop on carbon rich peatlands.